Aeschylus (Aiskhylos) is often recognized as the father of tragedy, and is the first of the three early Greek tragedians whose plays survive extant (the other two being Sophocles and Euripides). In fact, by expanding the number of characters in plays to allow for conflict among them (previously, only a single character interacted with the Chorus) he was arguably the founder of all serious Greek drama (although some credit that honour to Phrynichus or the even earlier Thespis). Only seven of over seventy plays written by Aeschylus have survived into modern times, the best known being “The Oresteia” trilogy. 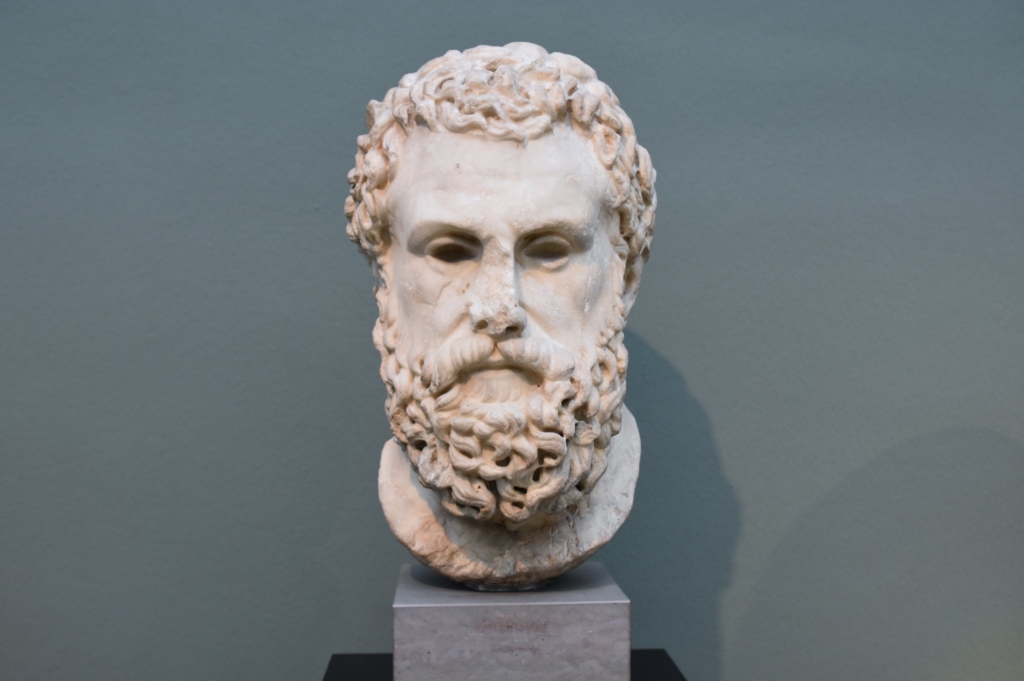 There are few reliable sources for the life of Aeschylus. He was said to have been born in about 525 or 524 BCE in Eleusis, a small town just northwest of Athens. As a youth, he worked at a vineyard until, according to tradition, the god Dionysus visited him in his sleep and commanded him to turn his attention to the nascent art of tragedy. His first play was performed when he was only 26 years old (in 499 BCE), and fifteen years later he won his first prize at Athens’ annual Dionysia playwriting competition.

Aeschylus and his brother Cynegeirus fought to defend Athens against Darius’s invading Persian army at the Battle of Marathon in 490 BCE and, although the Greeks won a famous victory against apparently overwhelming odds, Cynegeirus died in the battle, which had a profound effect on Aeschylus. He continued to write plays, although he was called into military service against the Persians again in 480 BCE, this time against Xerxes’ invading forces at the Battle of Salamis. This naval battle holds a prominent place in “The Persians”, his oldest surviving play, which was performed in 472 BCE and won first prize at the Dionysia. In fact, by 473 BCE, after the death of his chief rival Phrynichus, Aeschylus was winning first prize in nearly every competition at the Dionysia.

He made several visits to the important Greek city of Syracuse in Sicily at the invitation of the tyrant Hieron, and it is thought that he also travelled extensively in the region of Thrace. He returned to Sicily for the last time in 458 BCE and it was there that he died, while visiting the city of Gela in 456 or 455 BCE, traditionally (although almost certainly apocryphally) by a tortoise which fell out of the sky after it was dropped by an eagle. Interestingly, the inscription on Aeschylus’ gravestone makes no mention of his theatrical renown, commemorating only his military achievements. His sons, Euphorion and EuÃ¦on, and his nephew, Philocles, followed in his footsteps and became playwrights themselves.

Only seven of an estimated seventy to ninety tragedies written by Aeschylus have survived intact: “Agamemnon”, “The Libation Bearers” and “The Eumenides” (these three forming a trilogy collectively known as “The Oresteia”), “The Persians”, “The Suppliants”, “Seven Against Thebes” and “Prometheus Bound” (whose authorship is now disputed). All of these plays, with the possible exception of “Prometheus Bound”, are known to have taken the first prize at the City Dionysia, which Aeschylus won thirteen times in total. Although “The Oresteia” is the only wholly extant example of a connected trilogy, there is ample evidence that Aeschylus often wrote such trilogies.

At the time that Aeschylus first began writing, the theatre had only just begun to evolve in Greece, usually involving just a single actor and a Chorus. Aeschylus added the innovation of a second actor, allowing for greater dramatic variety, and gave the Chorus a less important role. He is also sometimes credited with introducing scene-decoration (although this distinction is sometimes ascribed to Sophocles) and more elaborate and dramatic costuming. In general, though, he continued to write within the very strict bounds of Greek drama: his plays were written in verse, no violence could be performed on stage, and the works had a strong moral and religious emphasis.