“The Libation Bearers” (Gr: “Choephoroi”) is the second of the three linked tragedies which make up “The Oresteia” trilogy by the ancient Greek playwright Aeschylus, preceded by “Agamemnon” and followed by “The Eumenides”. The trilogy as a whole, originally performed at the annual Dionysia festival in Athens in 458 BCE, where it won first prize, is considered to be Aeschylus‘ last authenticated, and also his greatest, work. “The Libation Bearers” deals with the reunion of Agamemnon‘s children, Electra and Orestes, and their revenge as they kill Clytemnestra and Aegisthus in a new chapter of the curse of the House of Atreus.

Some years after the murder of Agamemnon, Clytemnestra (who now shares both her bed and the throne of Argos with her lover, Aegisthus) has a nightmare about giving birth to a snake which then feeds from her breast and draws blood along with milk. Concerned at the possible wrath of the gods, she orders her daughter, Electra (now reduced to the virtual status of a slave-girl) and the Chorus of slave women – the libation bearers of the title – to pour libations on Agamemnon‘s grave as an offering to the gods. The Chorus, captives from old wars and loyal to Orestes and Electra, are strongly opposed to Clytemnestra and Aegisthus, and they play a crucial part in explaining the unfolding conspiracy.

At her father’s grave, Electra meets her recently returned brother Orestes (who had been banished from the kingdom since his infancy by his paranoid mother). Orestes identifies himself with the snake in his mother’s dream, and the two siblings plan to avenge their father by killing their mother and Aegisthus, as Apollo himself has commanded him.

Orestes and his childhood friend Pylades pretend to be ordinary travellers from Phocis asking for hospitality at the palace of Argos. They bring the false news that Orestes is dead, and gain entrance to the palace. Orestes‘ old nurse, Cilissa, is despatched to fetch Aegisthus to see the visitors, and the Chorus persuades her to ensure that he comes alone, so that Orestes easily overpoweres and kills him. Although his cover is blown, Orestes seizes his mother, Clytemnestra, and threatens to kill her. She warns Orestes that if he kills her he will be cursed, but Orestes is not swayed, and (persuaded to the task by Apollo and Pylades, despite his misgivings) he kills Clytemnestra.

He proclaims that justice has been served, and tries to justify his actions. But then the Erinyes (Furies) appear, visible only to Orestes, and curse him for killing his mother, for them a crime far more significant than Clytemnestra‘s own crime in killing her husband. Seized with a madness over his deeds, and haunted and pursued by the Erinyes, Orestes flees Argos. 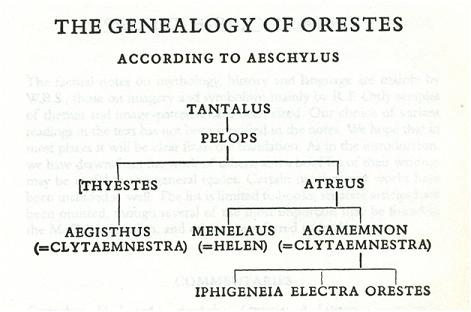 Aeschylus seems to place a certain amount of emphasis on the natural weakness of women in his plays. In “The Libation Bearers”, the vulnerability of women is shown through Electra and the Chorus of slave women, and the usurping female Clytemnestra is contrasted with male rightful authority, embodied first in Agamemnon and then in Orestes. The more traditional Aeschylus does not make any attempt at the more balanced male-female dynamics sometimes shown by Euripides. 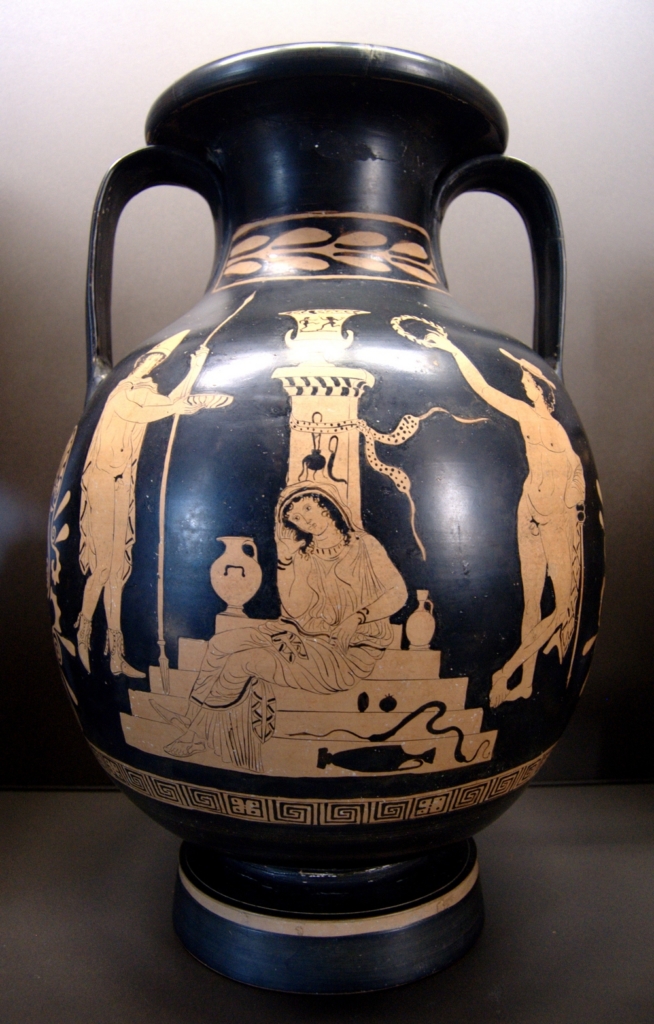 There is also an underlying metaphorical aspect to the entire drama: the change from archaic self-help justice by personal revenge or vendetta to the administration of justice by trial (sanctioned by the gods themselves) throughout the series of plays, symbolizes the passage from a primitive Greek society governed by instincts, to a modern democractic society governed by reason. The tension between tyranny and democracy, a common theme in Greek drama, is palpable throughout the three plays.

By the end of the trilogy, Orestes is seen to be the key, not only to ending the curse of the House of Atreus, but also in laying the foundation for a new step in the progress of humanity. Thus, although Aeschylus uses an ancient and well-known myth as the basis for his “Oresteia”, he approaches it in a distinctly different way than other writers who came before him, with his own agenda to convey.