“Prometheus Bound” (Gr: “Prometheus Desmotes”) is a tragedy often attributed to the ancient Greek playwright Aeschylus although it is now usually considered to be almost certainly the work of another (unknown) hand, perhaps as late as 415 BCE. It is based on the myth of Prometheus, the Titan who was punished by the god Zeus for giving fire to mankind. 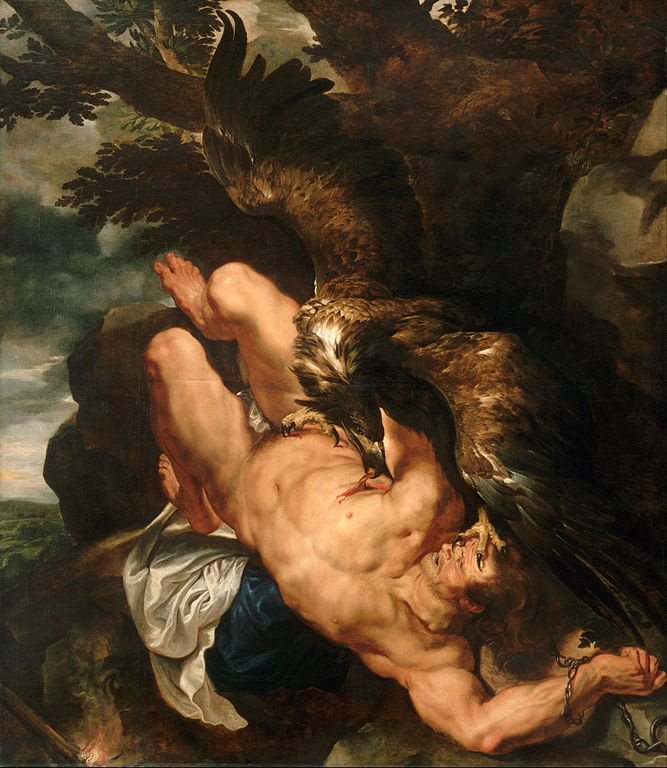 At the beginning of the play, Hephaestus, the blacksmith of the gods, accompanied by Kratos and Bia (representing Power and Force), reluctantly chains Prometheus to a mountain in the Caucasus, (considered by the ancient Greeks to be the end of the earth), while Kratos heaps abuse on him and Bia remains mute throughout. Although Hephaestus has some sympathy for Prometheus‘ plight, especially in that Prometheus was instrumental in Zeus’ victory in the great battle against the Titans, Kratos reminds him that this is Zeus’ punishment for Prometheus‘ theft of forbidden fire from the gods.

A Chorus of ocean nymhs (Prometheus‘ cousins, the Oceanids), attempt to comfort Prometheus. He confides in the Chorus that his gift of fire to mankind was not his only benefaction, and reveals that it was he who thwarted Zeus’ plan to obliterate the human race after the battle against the Titans, and then taught men all the civilizing arts, such as writing, medicine, mathematics, astronomy, metallurgy, architecture and agriculture (the so-called “Catalogue of the Arts”).

Later, the Titan Oceanus himself enters, announcing his intent to go to Zeus to plead on Prometheus‘ behalf. But Prometheus discourages him, warning that the plan will only bring Zeus’s wrath down on Oceanus himself. However, he appears confident that Zeus will eventually release him anyway, as he will have need of Prometheus‘ gift of prophecy in order to safeguard his own position (he hints several times at the prophecy about a son who would become greater than his father). 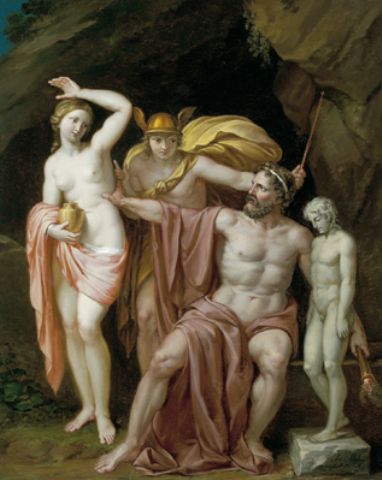 Prometheus is then visited by Io, once a beautiful maiden pursued by the lustful Zeus, but now, thanks to the jealous Hera, transformed into a cow, pursued to the ends of the earth by a biting gadfly. Prometheus again demonstrates his gift of prophecy in revealing to Io that her torments will continue for some time, but will eventually end in Egypt, where she will bear a son named Epaphus, adding that one of her descendants several generations hence (the unnamed Heracles), will be the one who will release Prometheus himself from his own torment.

Towards the end of the play, Zeus sends Hermes the messenger-god down to Prometheus to demand of him who it is that threatens to overthrow him. When Prometheus refuses to comply, the angry Zeus strikes him with a thunderbolt that plunges him down into the abyss of Tartarus, where he is to be tortured forever with fantastic and terrible pains, organ-devouring beasts, lightning and never-ending agony.

Aeschylus‘ treatment of the myth of Prometheus departs radically from the earlier accounts in Hesiod‘s “Theogony” and “Works and Days”, where the Titan is portrayed as a lowly trickster. In “Prometheus Bound”, Prometheus becomes more of a wise and proud human benefactor rather than an object of blame for human suffering, and Pandora and her jar of evils (whose arrival was prompted by Prometheus‘ theft of fire in Hesiod‘s account) is entirely absent.

“Prometheus Bound” was purportedly the first play in a Prometheus trilogy conventionally called the “Prometheia”. However, the other two plays, “Prometheus Unbound” (in which Heracles frees Prometheus from his chains and kills the eagle that had been sent daily to eat the Titan’s perpetually regenerating liver) and “Prometheus the Fire-Bringer” (in which Prometheus warns Zeus not to lie with the sea nymph Thetis as she is fated to give birth to a son greater than the father, an act which brings about the grateful Zeus’ final reconciliation with Prometheus), survive only in fragments. 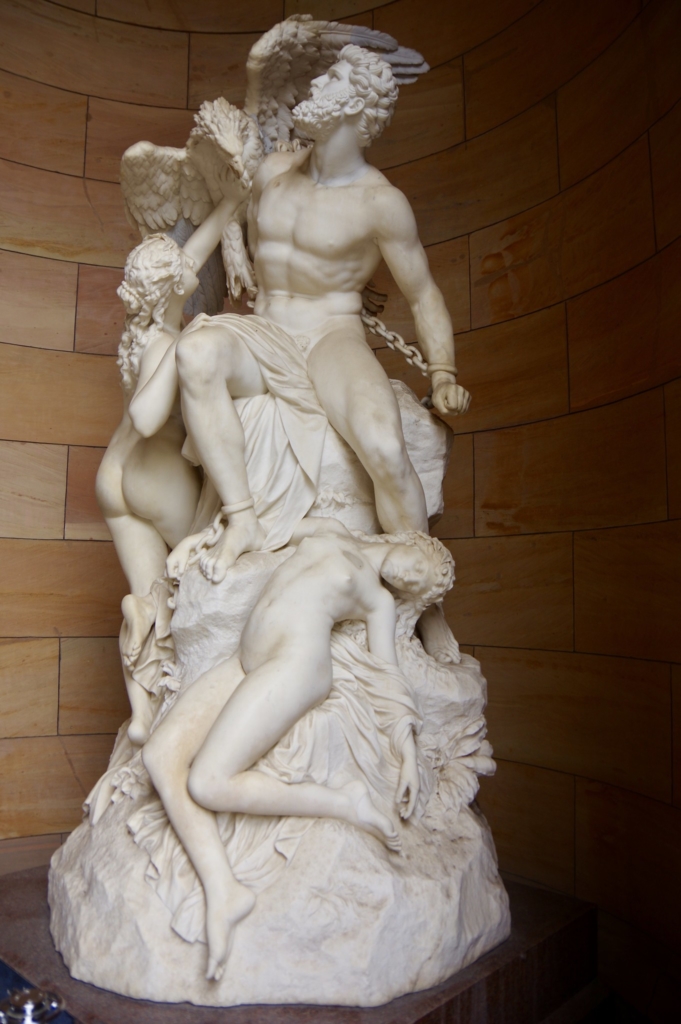 Although there are reports dating back to the Great Library of Alexandria unanimously crediting Aeschylus as the author of “Prometheus Bound”, modern scholarship (based on stylisic and metrical grounds, as well as its uncharacteristically unflattering depiction of Zeus, and references to it in the works of other writers) increasingly points to a date of around 415 BCE, long after Aeschylus‘ death. Some scholars have even suggested that it may be the work of Aeschylus‘ son, Euphorion, who was also a playwright. The ongoing debate will, however, probably never be resolved definitively.

Much of the play is composed of speeches and contains little action, especially given that its protagonist, Prometheus, is chained and immobile throughout.

A major theme throughout the play is about resisting tyranny and the frustration and helplessness of reason and rightness in the face of sheer power. Prometheus is the personification of reason and wisdom, but he also represents the individual of conscience in a tyrannical totalitarian state (a common theme in Greek plays of the era). He is portrayed as the rebel with a conscience, whose crime – his love of man – brings on him the rage of the gods, but also the immediate sympathy of the human audience. He becomes a representative for those human champions of justice and principle who defy tyranny and pay the ultimate price. In some ways, Prometheus prefigures Christ, as a divine being who suffers horrible tortures for the sake of mankind.

Another big theme in the play is that of fate. As a visionary who can see the future, Prometheus knows full well that he cannot escape his long years of torture, but he also knows that one day he will be set free, and that he possesses a piece of strategic knowledge that could preserve or destroy Zeus’s reign.