“The Frogs“ (Gr: “Batrachoi“) is a comedy by the ancient Greek playwright Aristophanes. It won first prize at the Lenaia dramatic festival in 405 BCE, and was so successful that it was staged a second time later that same year at the Dionysia festival. It tells the story of the god Dionysus (also known to the Greeks as Bacchus) who, despairing of the current state of Athens’ tragedians, travels to Hades with his slave Xanthias to bring Euripides back from the dead. 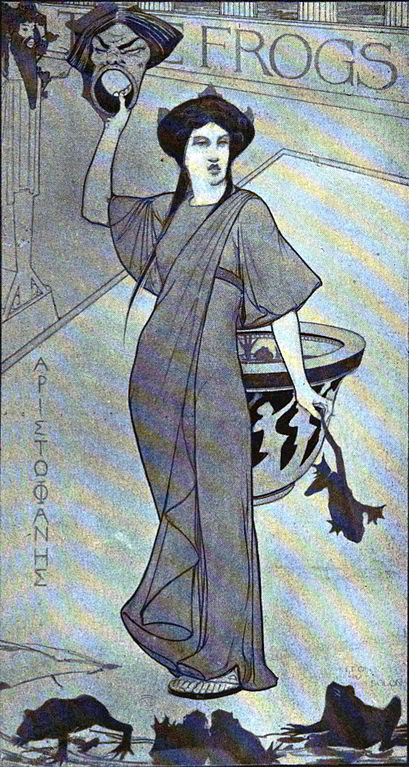 The play opens as Dionysus and Xanthias (technically his slave, but clearly smarter, stronger, more rational, more prudent, and braver than Dionysus) argue over what kind of complaints Xanthias can use to open the play comically.

Depressed by the state of contemporary Athenian tragedy, Dionysus plans to travel to Hades to bring the great tragedic dramatist Euripides back from the dead. Dressed in a Heracles-style lion-hide and carrying a Heracles-style club, he goes to consult with his half-brother Heracles himself (who had visited Hades when he went to retrieve Cerberus) as to the best way to get there. Bemused at the spectacle of the effeminate Dionysus, Heracles can only suggest the options of hanging himself, drinking poison or jumping off a tower. In the end, Dionysus opts for the longer journey across a lake, the same route Heracles himself once took.

They arrive at the Acheron and the ferryman Charon ferries Dionysus across, although Dionysus is obliged to help with the rowing (Xanthias, being a slave, has to walk around). On the crossing, a Chorus of croaking frogs (the frogs of the play’s title) joins them, and Dionysus chants along with them. He meets up with Xanthias again at the far shore, and almost immediately they are confronted by Aeacus, one of the judges of the dead, who is still angry over Heracles‘ theft of Cerberus. Mistaking Dionysus for Heracles due to his attire, Aeacus threatens to unleash several monsters on him in revenge, and the cowardly Dionysus quickly trades clothes with Xanthias.

A beautiful maid of Persephone then arrives, happy to see Heracles (actually Xanthius), and she invites him to a feast with virgin dancing girls, in which Xanthias is more than happy to oblige. Dionysus, though, now wants to trade back the clothes, but as soon as he changes back into the Heracles lion-skin, he encounters more people angry at Heracles, and quickly forces Xanthias to trade a third time. When Aeacus returns once more, Xanthias suggests that he torture Dionysus to obtain the truth, suggesting several brutal options. The terrified Dionysus immediately reveals the truth that he is a god, and is allowed to proceed after a good whipping. 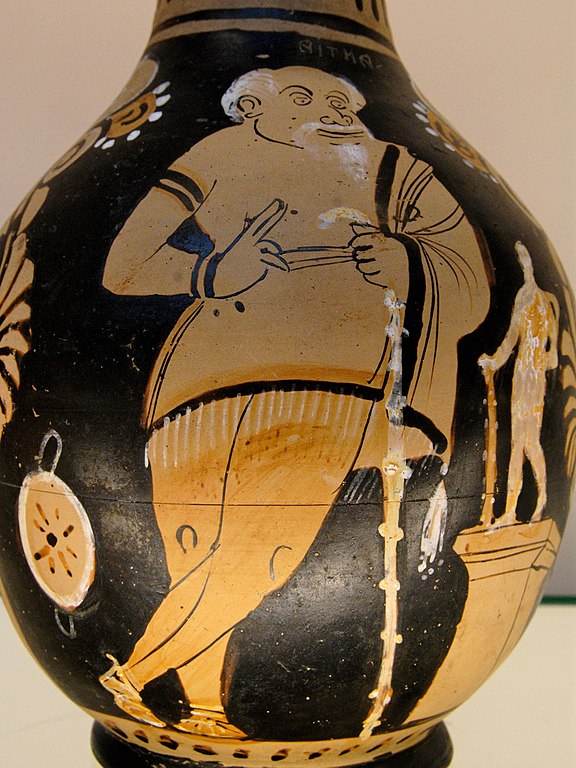 When Dionysus finally finds Euripides (who has only just recently died), he is challenging the great Aeschylus to the seat of “Best Tragic Poet” at the dinner table of Hades, and Dionysus is appointed to judge a contest between them. The two playwrights take turns quoting verses from their plays and making fun of the other. Euripides argues the characters in his plays are better because they are more true to life and logical, whereas Aeschylus believes his idealized characters are better as they are heroic and models for virtue. Aeschylus shows that Euripides ‘ verse is predictable and formulaic, while Euripides counters by setting Aeschylus‘ iambic tetrameter lyric verse to flute music.

Finally, in an attempt to end the stalemated debate, a balance is brought in and the two tragedians are told to put a few of their weightiest lines onto it, to see in whose favour the balance will tip. Aeschylus easily wins, but Dionysus is still unable to decide whom he will revive.

He finally decides to take the poet who gives the best advice about how to save the city of Athens. Euripides gives cleverly worded but essentially meaningless answers while Aeschylus provides more practical advice, and Dionysus decides to take Aeschylus back instead of Euripides . Before leaving, Aeschylus proclaims that the recently deceased Sophocles should have his chair at the dinner table while he is gone, not Euripides .

The underlying theme of “The Frogs” is essentially “old ways good, new ways bad”, and that Athens should turn back to men of known integrity who were brought up in the style of noble and wealthy families, a common refrain in Aristophanes‘ plays. 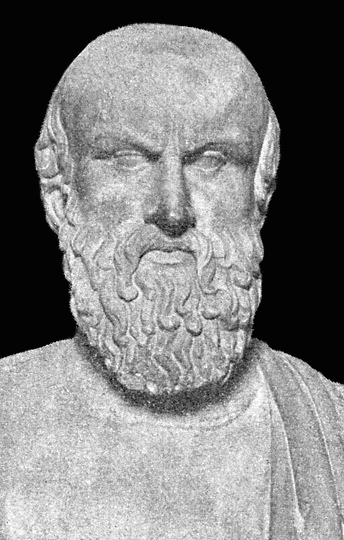 In terms of politics, “The Frogs” is not usually considered one of Aristophanes‘ “peace plays” (several of his earlier plays call for an end to the Peloponnesian War, almost at any cost), and indeed the advice of Aeschylus‘ character towards the end of the play lays out a plan to win and not a proposition of capitulation. The parabasis to the play also advises returning the rights of citizenship back to those who had participated in the oligarchic revolution in 411 BCE, arguing they were misled by Phrynichos’ tricks (Phrynichos was a leader of the oligarchic revolution, assassinated to general satisfaction in 411 BCE), an idea which was actually later put into effect by the Athenian government. Certain passages in the play also seem to stir memories of the returned Athenian general Alcibiades after his earlier defection.

However, despite Aristophanes‘ concerns for the delicate state of Athenian politics at that time (which do surface from time to time), the play is not strongly political in nature, and its main theme is essentially literary, namely the poor state of contemporary tragedic drama in Athens.

Aristophanes began composing “The Frogs” not long after Euripides ‘ death, around 406 BCE, at which time Sophocles was still alive, which is probably the main reason why Sophocles was not involved in the competition of poets which comprises the agon or main debate of the play. As it happens, however, Sophocles also died during that year, and that may have forced Aristophanes to revise and adjust some details of the play (which was probably already in the late stages of development), and this may well account for the mention of Sophocles late in the surviving version of the work.

Aristophanes does not scruple to attack and mock Dionysus, the guardian god of his own art and in honour of whom the play itself was exhibited, secure in the belief that the gods understood fun as well, if not better, than men. Thus, Dionysus is portrayed as a cowardly, effeminate dilettante, farcically dressed up in a hero’s lion-skin and club, and reduced to rowing himself over the lake to Hades. His half-brother, the hero Heracles, is likewise treated somewhat irreverently, depicted as a boorish brute. Xanthias, Dionysus‘ slave, is depicted as smarter and more reasonable than either of them.