“The Knights” (Gr: “Hippeis”) is a comedy by the ancient Greek playwright Aristophanes. It won first prize at the Lenaia festival when it was produced in 424 BCE. The play is a satire on political and social life in 5th Century BCE Athens, and in particular a diatribe against the pro-war populist politician, Cleon. In the play, a sausage-seller, Agoracritus, vies with Paphlagonian (representing Cleon) for the confidence and approval of Demos (an elderly man who symbolizes the Athenian citizenry) and Agoracritus emerges triumphant from a series of contests and miraculously restores Demos to his former youth and glory. 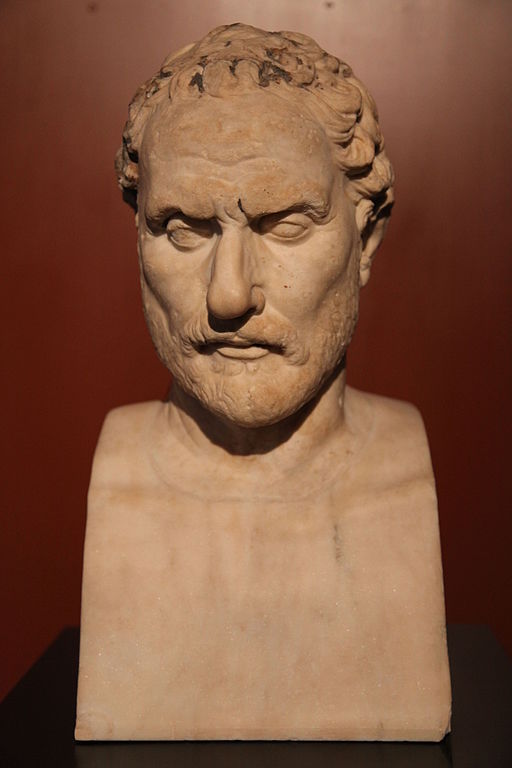 Nicias and Demosthenes, two slaves of the elderly Athenian Demos, run howling from Demos’ house, complaining of a beating they have received. They blame fellow slave, Paphlagonian (representing Cleon), who has wheedled his way into Demos’ confidence, and often dupes their master into beating them and regularly takes credit for work done by themselves.

They fantasize about running away from their master, but instead they pilfer some wine and, after a few drinks, they are inspired to steal Cleon’s most treasured possession, a set of oracles that he has always refused to let anyone else see. When they read the stolen oracles, they learn that Cleon is one of several peddlers destined to rule the polis, and that it is his fate to be replaced by a sausage-seller.

A sausage-seller, Agoracritus, happens to pass by at that very moment, with his portable kitchen. The two slaves acquaint him with his destiny, although he is far from convinced at first. His suspicions aroused, Cleon rushes from the house and, discovering the empty wine bowl, he immediately accuses the others of treason. Demosthenes calls upon the Knights of Athens for assistance and a Chorus of them charges into the theatre and rough up Cleon, accusing him of manipulating the political and legal system for personal gain.

After a shouting match between Cleon and the sausage-seller, in which each man strives to demonstrate that he is a more shameless and unscrupulous orator than the other, the Knights proclaim the sausage-seller the winner, and Cleon storms off to denounce them all on a trumped-up charge of treason. 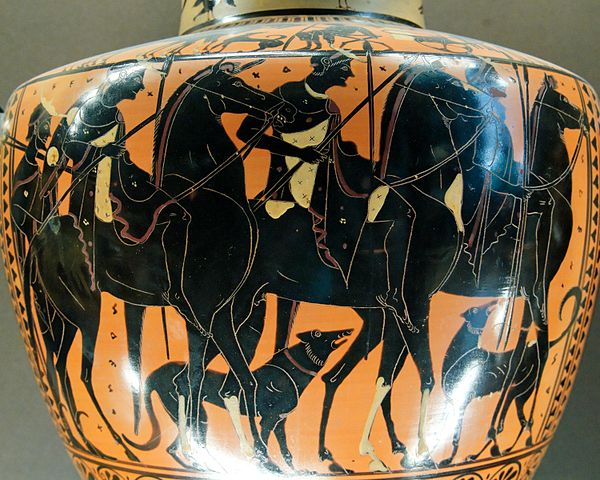 The Chorus steps forward to address the audience on behalf of the author, praising the very methodical and cautious way Aristophanes has approached his career as a comic poet, and praising the older generation of men who made Athens great. There is a rather strange passage in which the Greek horses employed during the recent assault on Corinth are imagined to have rowed the boats in gallant style.

When the sausage-seller returns, he reports that he has won the Council’s support by outdoing Cleon with extravagant offers of free food at the state’s expense. Cleon returns in a rage and challenges the sausage-seller to submit their differences directly to Demos. The sausage-seller accuses Cleon of being indifferent to the war-time sufferings of ordinary people, and of using the war as an opportunity for corruption, and claims that Cleon prolongs the war out of fear that he will be prosecuted when peace returns. Demos is won over by these arguments and spurns Cleon’s wheedling appeals for sympathy.

Thereafter, the sausage seller’s accusations against Paphlagonian/Cleon become increasingly vulgar and absurd. The sausage-seller wins two further contests in which they compete for Demos’ favour, one in the reading of oracles flattering to the people, and one in a race to see which of them can best serve the pampered Demos’ every need.

Now desperate, Cleon makes one last effort to retain his privileged position in the household, by presenting his oracle and questioning the sausage-seller to see if he matches the description of his successor described in the oracle, in all its vulgar details, which indeed he does. In tragic dismay, he at last accepts his fate and surrenders his place to the sausage-seller.

The Knights of the Chorus step forward and advise us that it is honourable to mock dishonourable people, and proceed to mock Ariphrades for his perverse appetite for female secretions, and Hyperbolus for carrying the war to Carthage.

Agoracritus returns to the stage, announcing a new development: he has rejuvenated Demos by boiling him down like a piece of meat, and the new Demos is introduced, wondrously restored to youth and vigour and dressed in the garb of the old Athenians of the times of the victory at Marathon. Agoracritus then presents two beautiful girls known as the “Peacetreaties” that Cleon had kept locked up in order to prolong the war.

Demos invites Agoracritus to a banquet at the town hall and the entire cast exits in good cheer, all except Paphlagonian/Cleon of course, who is now reduced to selling sausages at the city gate as punishment for his crimes.

As a satire on the social and political life of classical Athens during the Peloponnesian War, the play is typical of Aristophanes‘ early plays. However, it is unique in the relatively small number of its characters, due to its somewhat scurrilous preoccupation with one man, the pro-war populist, Cleon, who had previously prosecuted Aristophanes for slandering the polis with an earlier (lost) play, “The Babylonians” in 426 BCE. The young dramatist had promised revenge against Cleon in his next play “The Acharnians” in 425 BCE, and “The Knights”, produced the very next year, represents that revenge.

Aristophanes had the prudence not to actually use the name Cleon anywhere in the play, however, substituting the allegorical character Paphlagonian, but describing him so that he could not possibly be mistaken. From fear of Cleon’s faction, no mask-maker dared to make a copy of his face for the play, and Aristophanes bravely resolved to play the part himself, merely painting his own face. The Knights of the Chorus were the wealthy class of Athens, politicized and educated enough to be able to see through the demagoguery of the populist Cleon and seen by Aristophanes as his natural allies in his personal crusade against him.

Aristophanes makes numerous accusations against Cleon in the play, many of them comic but some in earnest. These include questions about his social origins, his use of the law courts for personal and political ends, his attempts at political censorship (including of Aristophanes himself), his abuse of the audits of state offices and his manipulation of census lists in order to impose crippling financial burdens on his choice of victims. It should be borne in mind that Cleon himself would probably have had a front row seat at the Lenaia festival performance of the play. 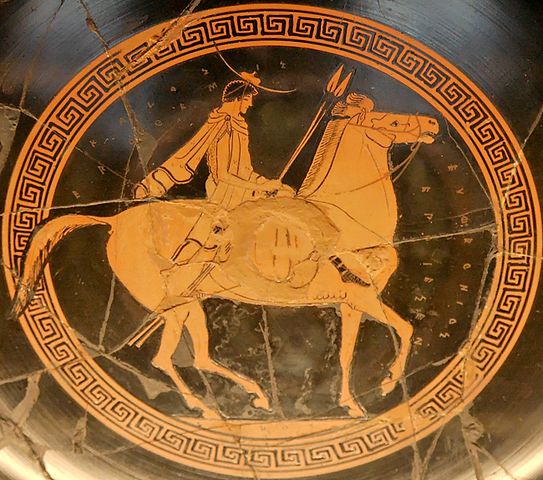 The play relies heavily on allegory and many critics have observed that it is not wholly successful in that respect. Although the main characters are drawn from real life (with Cleon presented as the main villain), the allegorical characters are figures of fantasy (the villain in this scenario being Paphlagonian, a comic monstrosity represented as responsible for almost all evils in the world), and the identity of Cleon with Paphlagonian is somewhat awkward and some of the ambiguities are never fully resolved.

Imagery is one of the most important aspects of Aristophanes‘ comic poetry, and some of the imagery in “The Knights” is quite bizarre. For instance, the allegorical figure of Paphlagonian (Cleon) is variously described as a monstrous giant, a snoring sorcerer, a mountain torrent, a hook-footed eagle, a garlic pickle, a mud-stirrer, a fisherman watching for shoals of fish, a butchered pig, a bee browsing blooms of corruption, a dog-headed ape, a storm by sea and land, a giant hurling crags, a thieving nurse, a fishermen hunting eels, a boiling pot, a lion fighting gnats, a dog fox and a beggar.

Gluttony is one of the dominant themes that emerge from the play’s imagery, and the exaggerated focus on food and drink (including food-related puns on some of the names) as well as various references to cannibalism present the audience with a rather nightmarish and nauseating vision of the world, making the final vision of a reformed Athens all the brighter by contrast.