Euripides was the last of the three great tragedians of classical Greece (the other two being Aeschylus and Sophocles). Largely due to an accident of history, eighteen of Euripides’ ninety-five plays have survived in a complete form, along with fragments (some substantial) of many of his other plays.

He is known primarily for having reshaped the formal structure of traditional Greek tragedy by showing strong female characters and intelligent slaves, and by satirizing many heroes of Greek mythology. He is considered to be the most socially critical of all the ancient Greek tragedians, and his plays seem quite modern in comparison with those of his contemporaries. 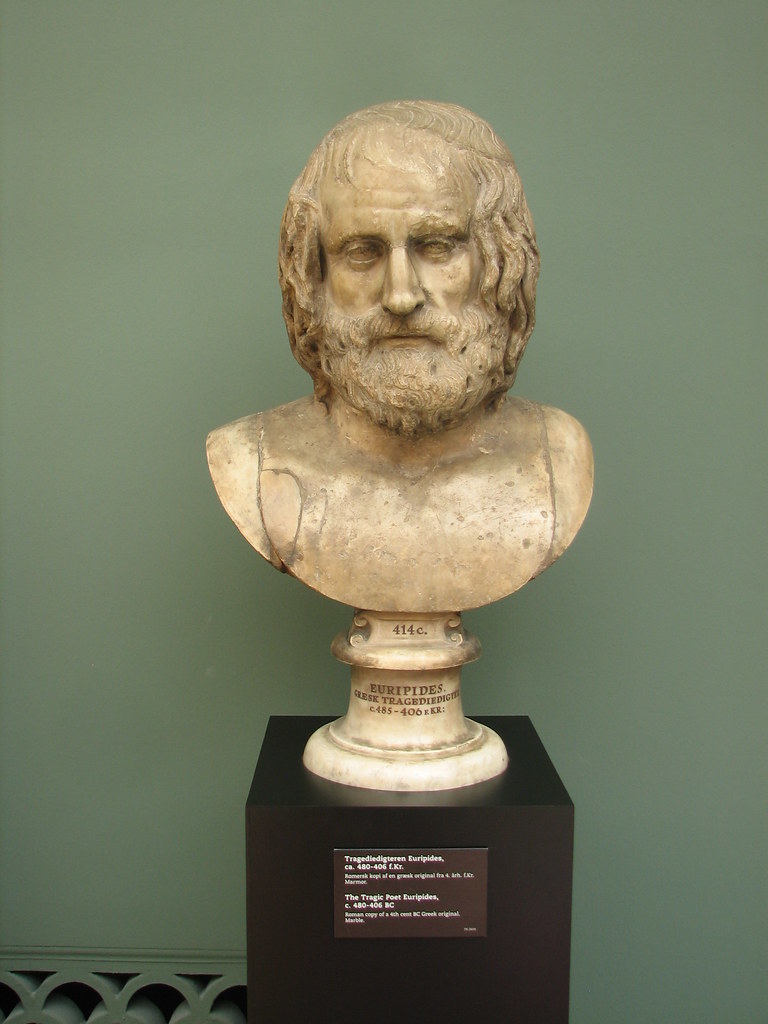 According to legend, Euripides was born in Salamis 480 BCE, at the location and on the day of the Persian War’s greatest naval battle (although other sources estimate that he was born as early as 485 or 484 BCE). His family was probably a wealthy and influential one, and as a youth he served as a cup-bearer for Apollo’s dancers, although he later grew to question the religion he grew up with, exposed as he was to philosphers and thinkers such as Protagoras, Socrates and Anaxagoras.

He was married twice, to Choerile and Melito, and had three sons and a daughter (who, it was rumoured, was killed after an attack by a rabid dog). We have little or no record of Euripides’ public life. It is likely that he engaged in various public or political activities during his lifetime, and that he travelled to Syracuse in Sicily on at least one occasion.

According to tradition, Euripides wrote his tragedies in a sanctuary, known as The Cave of Euripides, on Salamis Island, just off the coast from Piraeus. He first competed in the Dionysia, the famous Athenian dramatic festival, in 455 BCE, a year after the death of Aeschylus (he came in third, reportedly because he refused to cater to the fancies of the judges). In fact, it was not until 441 BCE that he won first prize, and over the course of his lifetime, he claimed just four victories (and one posthumous victory for “The Bacchae”), many of his plays being considered too controversial and non-traditional for the Greek audiences of the day.

Embittered over his defeats in the Dionysia playwriting competitions, he left Athens in 408 BCE at the invitation of King Archelaus I of Macedon, and he lived out his remaining days in Macedonia. He is believed to have died there in the winter 407 or 406 BCE, possibly due to his first exposure to the harsh Macedonia winter (although an improbable variety of other explanations for his death have also been suggested, such as that he was killed by hunting dogs, or torn apart by women).

The relatively large number of extant plays of Euripides (eighteen, with as many again in fragmentary form) is largely due to a freak accident, with the discovery of the “E-K” volume of a multi-volume alphabetically-arranged collection which had lain in a monastic collection for around eight hundred years. His best known works include “Alcestis”, “Medea”, “Hecuba”, “The Trojan Women” and “The Bacchae”, as well as “Cyclops”, the only complete satyr play (an ancient Greek form of tragicomedy, similar to the modern-day burlesque style) known to survive.

To the plot innovations introduced by Aeschylus and Sophocles, Euripides added new levels of intrigue and elements of comedy, and also created the love-drama. It has been suggested by some that Euripides’ realistic characterizations sometimes came at the expense of a realistic plot, and it is true that he sometimes relied on the “deus ex machina” (a plot device in which someone or something, often a god or goddess, is introduced suddenly and unexpectedly to provide a contrived solution to an apparently insoluble difficulty) to resolve his plays.

Some commentators have observed that Euripides’ focus on the realism of his characters was just too modern for his time, and his use of realistic characters (Medea is a good example) with recognizable emotions and a developed, multi-faceted personality may actually have been one reason why Euripides was less popular in his own time than some of his rivals. He was certainly no stranger to criticism, and was frequently denounced as a blasphemer and misogynist (a rather strange charge given the complexity of his female characters) and condemned as an inferior craftsman, especially in comparison to Sophocles.

By the end of the 4th Century BCE, however, his dramas had became the most popular of all, in part due to the simplicity of the language of his plays. His works strongly influenced later New Comedy and Roman drama, and were later idolized by the 17th Century French classicists such as Corneille and Racine, and his influence on drama reaches modern times.