“Hecuba“ (Gr: “Hekabe“) is a tragedy by the ancient Greek playwright Euripides, written around 424 BCE. The story takes place just after the Trojan War, as the Greeks are heading home, and depicts the grief of Hecuba, queen of the fallen city of Troy, over the sacrifice of her daughter Polyxena, and the revenge she takes over the added loss of her son Polydorus. It is one of the bleakest of all Euripides‘ dramas. 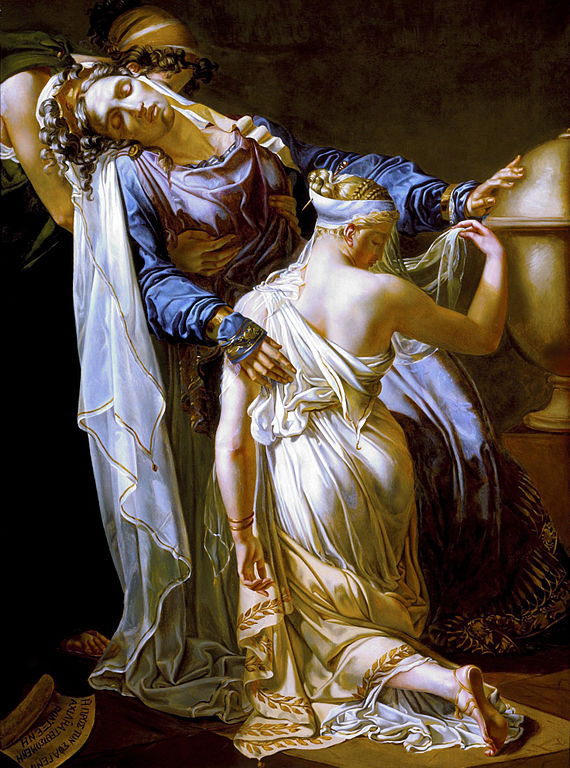 At the beginning of the play, the ghost of young Polydorus explains how he came to be there on the shores of the Chersonese peninsula of Thrace, how he had been sent by King Priam to the protection of his friend, the Thracian king Polymestor, as the war began to go badly for the Trojans, carrying a quantity of gold and jewellery to pay for his safekeeping there, but how Polymestor had cynically murdered him for the treasure after the fall of Troy, casting the boy’s body into the sea.

The shade of Polydorus also explains how the victorious Greeks and their Trojan captives had weighed anchor in that very same place on their way home, and now remained there becalmed at the command of the ghost of the Greek warrior Achilles, and how, in order to placate the spirit of Achilles and allow the Greeks to continue home, Polydorus’ own sister Polyxena must be sacrificed.

Queen Hecuba of Troy, herself now one of the captives, is introduced, anguishing over a nightmare she has had, and mourning her great losses of her husband and sons in the Trojan War, and now the added torment of having to sacrifice her own daughter, Polyxena. The Chorus of captive Trojan women express their sympathy for Hecuba‘s plight.

Polyxena joins her mother in a moving and pitiful scene of lament, until Odysseus comes to fetch Polyxena for the sacrifice. The eloquent and persuasive Odysseus tries to persuade Hecuba not to take the loss of her daughter too much to heart. Hecuba, for her part, attempts to shame Odysseus into releasing her daughter, but he is unmoved. Polyxena herself is resigned to her fate, declaring that she prefers death to slavery.

The herald Talthybius describes the death of Polyxena, and the grief-stricken Hecuba orders that her corpse not be touched, calling for water for a ritual cleansing. However, the servant who fetches the water also discovers the corpse of Hecuba‘s son Polydorus, now washed up on the shore. Hecuba immediately suspects that Polymestor has killed her son for the treasure and, pushed now to the edge of madness by her sufferings, begins to plot her revenge.

She calls on the Greek leader Agamemnon for help, and he allows her to summon Polymestor to her. Hecuba sends Polymestor a message pretending that she wishes tell him about some treasure she had buried at Troy, and he duly arrives, accompanied by his two sons. They are led into Hecuba‘s tent, where they are overpowered by the Trojan women hidden within.

The two sons, unfortunate collateral victims of Hecuba‘s larger plan, are summarily dispatched, and, after blood-curdling screams are heard from inside the tent, Hecuba emerges, triumphant. Polymestor crawls out from the tent, blinded and in agony, and reduced to the level of an animal. He curses Hecuba and the Trojan woman, threatening savage and bloody retribution.

Agamemnon is summoned to judge Polymestor and Hecuba. Polymestor feigns many excuses for the murder of Polydorus, but Hecuba convinces Agamemnon that he slew her son purely for the sake of the gold. Polymestor reveals a prophesy that Hecuba will die on the journey to Greece, and that her daughter Cassandra will die at the hands of Agamemnon‘s wife, Clytemnestra. At the close of the play, Polymestor is banished by Agamemnon to live out his remaining years alone on a desert island.

“Hecuba“ is one of the few tragedies that evoke a sense of utter desolation and destruction in the audience, and there is almost no let up in the mood of suffering and anguish, and no sign of any silver lining. Few ancient tragedies culminate in such unmitigated hopelessness for all the principle characters concerned, and even fewer imply that their terrible fates were quite so richly deserved.

However, the play is also remarkable for the grace and purity of its style, and it abounds in striking scenes and beautiful poetical passages (a particularly good example being the description of the capture of Troy).

The Trojan queen Hecuba in the aftermath of the Trojan War is one of the most tragic figures in classical literature. Her husband, King Priam, died after the fall of Troy by the hand of Achilles‘ son, Neoptolemus; her son Hector, the Trojan hero, was killed in battle by the Greek hero, Achilles, as was another son, Troilus; her son, Paris, the main cause of the war, was killed by Philoctetes; yet another son, Deiphobus, was slain during the sack of Troy, and his body mutilated; another son, the seer Helenus, was taken as a slave by Neoptolemus; her youngest son, Polydorus, was ignominiously killed by Thracian King Polymestor for the sake of some gold and treasure; her daughter, Polyxena was sacrificed on the tomb of Achilles; another daughter, the seeress Cassandra, was given as a concubine and whore to the Greek king Agamemnon after the war (later to be killed with him as described in Aeschylus‘ “Agamemnon”); and she herself was given as a slave to the hated Odysseus (as described in Euripides‘ “The Trojan Women”).

Given all this, Hecuba can arguably be forgiven a little bitterness. Already suffering from the multiple deaths of her husband and sons during the Trojan War, Hecuba is then confronted with two further excruciating losses, which are enough to finally tip her over into the role of vindictive aggressor, and the play concentrates to a large extent on the psychological process by which a victim turns into an avenger.

It essentially falls into two parts: in the first part, which centres on the sacrificial death of Hecuba‘s daughter Polyxena at the hands of the victorious Greeks, Hecuba is portrayed as a helpless victim of Greek machinations; in the second part, in which she responds to the murder of her son Polydorus at the hands of the Thracian king Polymestor, she has become an inexorable force of vengeance. 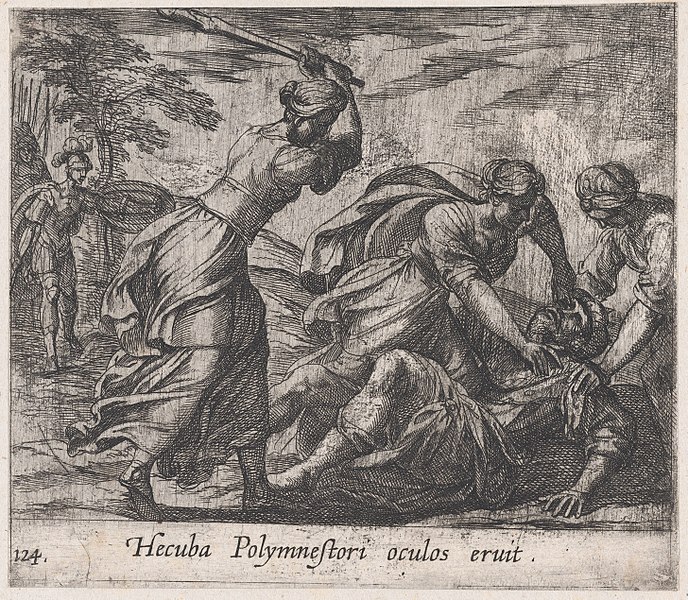 Although Hecuba herself has far more excuse than the male characters for her atrocious behaviour, her psychological trauma turns her into as culpable a villain as any of them, extracting not one but two lives for the life of Polydorus in addition to blinding Polymestor. Just as the blinded Polymestor is reduced to the level of a animal, Hecuba herself comes to behave like a beast when her emotions get out of control.

At the risk of offending his Athenian audience, Euripides presents the Greeks in the play, almost to a man, as casually brutal and despicable. Odysseus (whose life Hecuba once saved) is portrayed as shamefully indifferent and ungracious; Agamemnon is a self-centred coward, apparently incapable of virtuous action; and the Thracian Polymestor is one of the most unmitigatedly unpleasant characters in all ancient drama, a cynical, lying, avaricious opportunist.

Even that sacred cow, Greek justice, takes something of a beating in the play, with the revered Greek assembly revealed to be little more than an unthinking mob, and the hastily convened court towards the end of the play showing little connection with the administration of justice.

Euripides‘ major theme in the play, other than the misery and desolation caused by war, is that we alone (not the gods or some abstraction called Fate) are responsible for our own sorrows, and that we alone have the means to redeem our lives. In “Hecuba”, there are no impersonal gods causing Hecuba‘s madness; she is brought low by politics, expediency and greed.