“The Phoenician Women” (Gr: “Phoinissai”; Lat: “Phoenissae”) is a tragedy by the ancient Greek playwright Euripides. It was written between 411 and 409 BCE, and is a variant of the story Aeschylus treated in his play “Seven Against Thebes” in which Oedipus‘ sons Polynices and Eteocles fight for the crown of Thebes, ultimately killing each other. The title refers to the play’s Chorus, which is composed of Phoenician women on their way from Tyre to Delphi who are accidentally trapped in Thebes by the war.

The play opens with a prologue in which Jocasta (who in this version of the myth has not yet committed suicide) summarizes the story of Oedipus and the city of Thebes. She explains that after her husband blinded himself upon discovering that he was also her son, his sons Eteocles and Polynices locked him away in the palace in hopes that the people might forget what had happened. Oedipus however cursed them, proclaiming that neither would rule without killing his brother. In an attempt to avert this prophecy, Polynices and Eteocles agreed to rule for one year each in turn but, after the first year, Eteocles refused to allow his brother to rule for his year, forcing him into exile instead. While exiled, Polynices went to Argos, where he married the daughter of the Argive king Adrastus and persuaded Adrastus to send a force to help him reclaim Thebes.

Jocasta has arranged for a cease-fire so that she can try and mediate between her two sons. She asks Polynices about his life in exile, and then listens to the arguments of both brothers. Polynices explains again that he is the rightful king; Eteocles replies by saying that he desires power above all else and will not surrender it unless forced. Jocasta reprimands them both, warning Eteocles that his ambition may end up destroying the city, and criticizing Polynices for bringing an army to sack the city he loves. They argue at length but are unable to reach any agreement and war is inevitable.

Eteocles then meets with his uncle Creon to plan for the coming battle. Since the Argives are sending one company against each of the seven gates of Thebes, the Thebans also select one company to defend each of the gates. Eteocles asks Creon to petition the old seer Tiresias for advice, and is advised that he must kill his son Menoeceus (being the only pure-blooded descendant from the founding of the city by Cadmus) as a sacrifice to the war god Ares in order to save the city. Although Creon finds himself unable to comply with this and instructs his son to flee to the oracle at Dodona, Menoeceus actually secretly goes to the serpent’s lair to sacrifice himself to appease Ares. 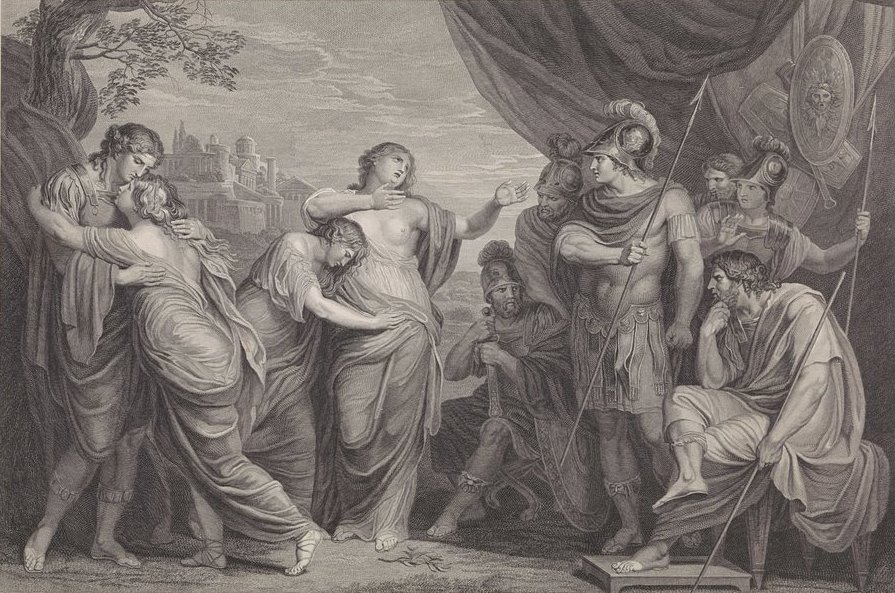 A messenger reports the progress of the war to Jocasta and tells her that her sons have agreed to fight in single combat for the throne. She and her daughter Antigone go to try to stop them, but a messenger soon brings the news that the brothers have already fought their duel and have killed each other. Furthermore, Jocasta, overcome with grief on finding out, has also killed herself.

Jocasta‘s daughter Antigone enters, lamenting the fate of her brothers, followed by the blind old Oedipus who is also told of the tragic events. Creon, who has assumed control of the city in the resulting power vacuum, banishes Oedipus from Thebes, and orders that Eteocles (but not Polynices) be buried honourably in the city. Antigone fights him over this order and breaks off her engagement with his son Haemon over it. She decides to accompany her father into exile, and the play ends with them departing towards Athens.

“The Phoenician Women” was probably first presented, along with the two lost tragedies “Oenomaus” and “Chrysippus”, at the Dionysia dramatic competition in Athens in 411 BCE (or possibly just after), the same year in which the oligarchic government of the Four Hundred fell and the exiled general Alcibiades was recalled by Athens after his defection to the enemy, Sparta. The dialogue between Jocasta and Polynices in the play, which expounds on the griefs of banishment with a certain emphasis, may well be a tongue-in-cheek allusion to the pardon of the famous Athenian exile. 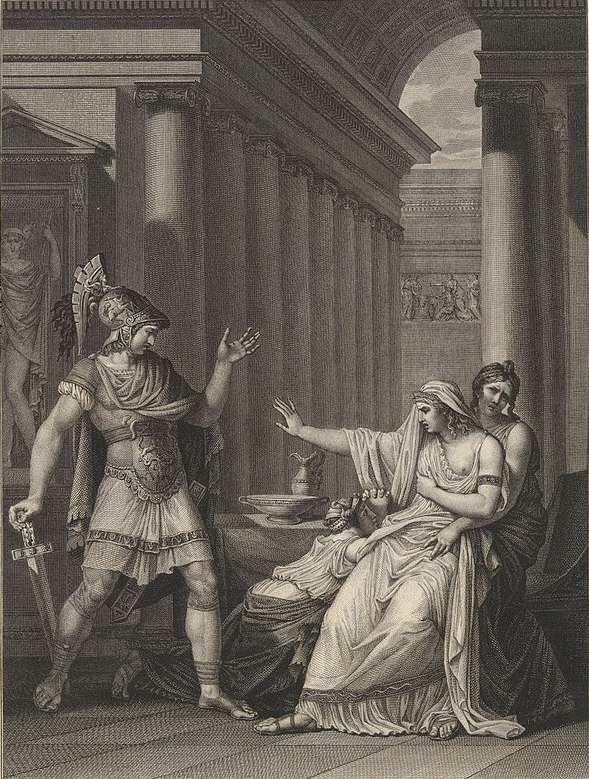 Although containing many brilliant passages, Euripides‘ rendition of the legend is often considered inferior to that of Aeschylus‘ “Seven Against Thebes”, and it is rarely produced today. Some commentators have complained that the introduction towards the end of the play of the blind old Oedipus is unnecessary and gratuitous, and that the incident of the self-immolation of Creon‘s son Menoeceus is perhaps glossed over somewhat. It was, however, very popular in the later Greek schools for its varied action and its graphic descriptions (particularly the narratives of the two messengers, first of the general fight between the contending armies, and secondly of the duel between the brothers and the suicide of Jocasta), which give a sustained interest to the piece, which extends to nearly twice the length of Aeschylus‘ drama.

Unlike the Chorus of Theban elders in Aeschylus‘ play, Euripides‘ Chorus is composed of young Phoenician women en route from their home in Syria to Delphi, trapped in Thebes by the war, who discover their ancient kinship with the Thebans (through Cadmus, founder of Thebes, who came originally from Phoenicia). This is consistent with Euripides‘ tendency to approach familiar stories more from the perspective of women and mothers, and also with his emphasis on the point of view of slaves (the women are on their way to become slaves at Apollo’s temple at Delphi).