Hesiod is often paired with his near contemporary Homer as one of the earliest Greek poets whose work has survived. He is considered the creator of didactic poetry (instructive and moralizing poetry), and his writings serve as a major source on Greek mythology (“Theogony”), farming techniques, archaic Greek astronomy and ancient time-keeping (“Works and Days”). 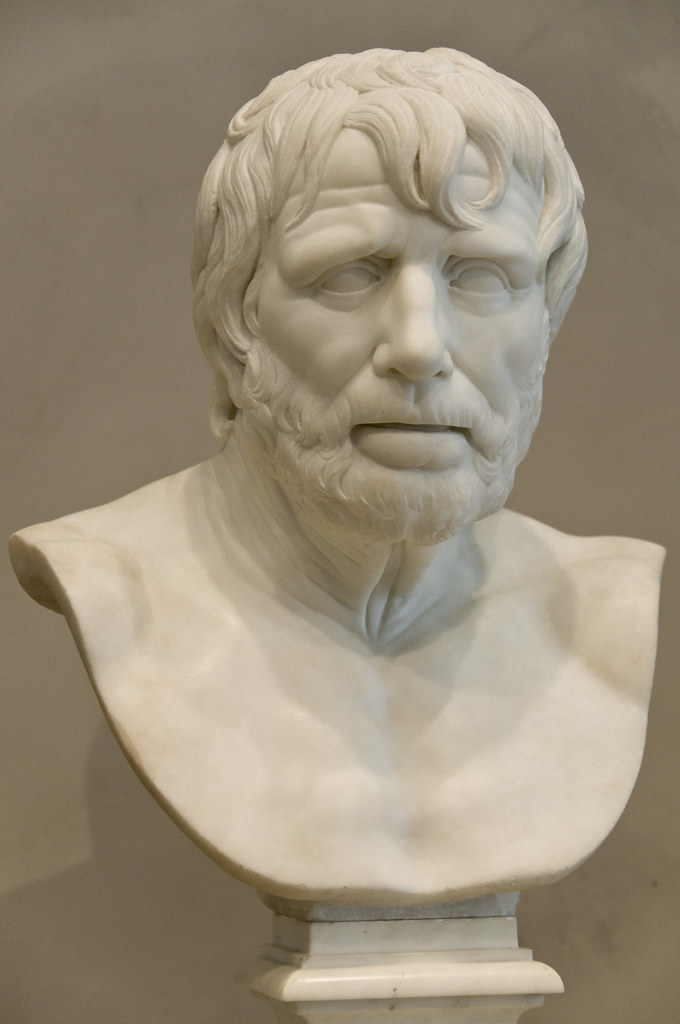 As with Homer, legendary traditions have accumulated around Hesiod, although we do have at least some biographical details from references in his own works. His father came from Cyme in Aeolis, (modern day western Turkey), but crossed the sea to settle in a small village in Boeotia at the foot of Mount Helicon in Greece.

As a youth, he worked as a shepherd in the mountains, and then, when his father died, as a small farmer working hard land. Hesiod claimed to have been granted the gift of poetic inspiration by the Muses themselves (who traditionally lived on Mount Helicon) while he was out tending sheep one day. After losing a lawsuit to his brother Perses over the distribution of his father’s land, he left his homeland and moved to the region of Naupactus in the Gulf of Corinth.

Hesiod’s dates are uncertain, but leading scholars generally agree that he lived in the latter half of the 8th Century BCE, probably shortly after Homer. His major works are thought to have been written around 700 BCE. Different traditions regarding Hesiod’s death have him dying either in the temple of Nemean Zeus at Locris, murdered by the sons of his host in Oeneon, or at Orchomenus in Boeotia.

Of the many works attributed in ancient times to Hesiod, three survive in complete form (“Works and Days”, “Theogony” and “The Shield of Heracles”) and many more in fragmentary state. However, most scholars now consider “The Shield of Heracles” and most of the other poetic fragments attributed to him as later examples of the poetic tradition to which Hesiod belonged, and not as the work of Hesiod himself.

Unlike the epic poetry of Homer, who wrote from the point of view of the rich and the nobility, “Works and Days” is written from the point view of the small independent farmer, probably in the wake of the dispute between Hesiod and his brother Perses over the distribution of his father’s land. It is a didactic poem, filled with moral precepts as well as myths and fables, and it is largely this (rather than its literary merit) that made it highly valued by the ancients. 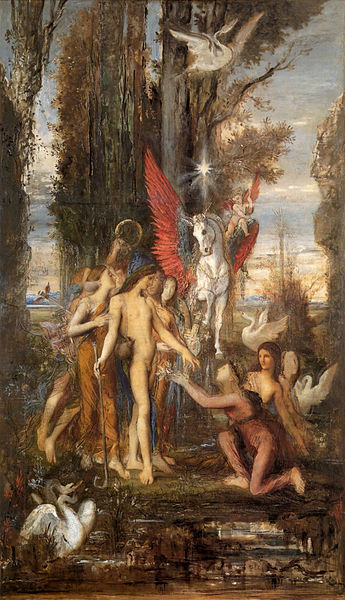 The 800 verses of “Works and Days” revolve around two general truths: that labour is the universal lot of Man, but he who is willing to work will always get by. It contains advice and wisdom, prescribing a life of honest labour (which is portrayed as the source of all good) and attacking idleness and unjust judges and the practice of usury. It also lays out the “Five Ages of Man”, the first extant account of the successive ages of mankind.

“Theogony” uses the same epic verse-form as “Works and Days” and, despite the very different subject matter, most scholars believe that the two works were indeed written by the same man. It is essentially a large-scale synthesis of a vast variety of local Greek traditions concerning the gods, and concerns the origins of the world and of the gods, beginning with Chaos and his progeny, Gaia and Eros.

The better known anthropomorphic deities like Zeus only come to the fore in the third generation, long after the early powers and the Titans, when Zeus wins a struggle against his father and thereby becomes king of the gods. According to the historian Herodotus, Hesiod’s retelling of the old stories became, despite the various different historical traditions, the definitive and accepted version that linked all Greeks in ancient times.