“Works and Days” (Gr:”Erga kaí Hemérai“; Lat: “Opera et Dies”) is a didactic poem written by the very early ancient Greek poet Hesiod. It was probably written around 700 BCE or earlier and is the first example we have of Greek didactic poetry (poetry that emphasizes instructional and informative qualities).

It embodies the experiences of his daily life and work, forming a sort of shepherd’s calendar, interwoven with episodes of fable, allegory, advice and personal history. It may have been written against a background of an agrarian crisis in mainland Greece, which inspired a wave of documented colonizations in search of new land.

After an opening invocation of Zeus and the Muses, the first portion of the poem is an ethical enforcement of honest labour and dissuasion from strife and idleness. The second section consists of hints and rules on agricultural husbandry. The third part is a religious calendar of the months, with remarks on the days most lucky or the contrary for rural or nautical employments.

The connecting link of the whole poem is the author’s advice to his brother, Perses, who appears to have bribed the corrupt judges to deprive Hesiod of his already scanty inheritance, and is content to while away his time in idle pursuits and accept Hesiod‘s additional charity.

Specific episodes which rise above the rather prosaic average include an early account of the “Five Ages of the World”; a much admired description of winter; the earliest known fable in Greek literature, that of “The Hawk and the Nightingale”; and the stories, also described in his “Theogony”, of Prometheus stealing fire from Zeus and the resulting punishment of man when Pandora releases all the evils of mankind from her jar (referred to in modern accounts as “Pandora’s box“), with only Hope left trapped inside. 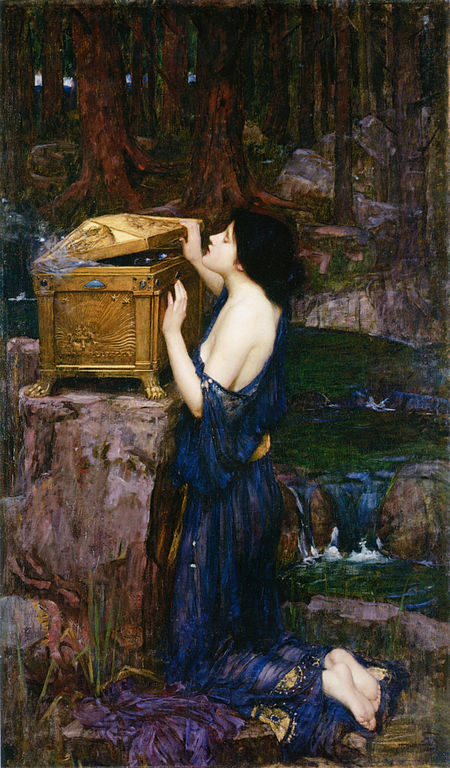 The poem revolves around two general truths: that labour is the universal lot of Man, but that he who is willing to work will always get by. Hesiod prescribes a life of honest labour (which he regards as the source of all good) and attacks idleness, suggesting that both the gods and men hate the idle. Within the poem’s advice and wisdom, Hesiod also pursues his own agenda to some extent, attacking unjust judges (such as those who decided in favour of Perses, Hesiod‘s less-than-responsible brother, who was granted an inheritance by the ruling of these unjust judges) and the practice of usury.

The poem is also the first extant account of the successive ages of mankind, known as the “Five Ages of Man”. In Hesiod‘s account, these are: the Golden Age (in which men lived among and freely mingled with the gods, and peace, harmony and abundance prevailed); the Silver Age (in which men lived for one hundred years as infants, followed by just a short strife-filled time as grown adults, an impious race of men which Zeus destroyed because they refused to worship the gods); the Bronze Age (in which men were hard and violent and lived only for war, but were undone by their own violent ways, relegated to the darkness of the Underworld); the Heroic Age (in which men lived as noble demigods and heroes, like those who fought at Thebes and Troy, and who went to Elysium on their deaths); and the Iron Age (Hesiod‘s own time, in which the gods have foresaken humanity, and in which man lives an existence of toil, misery, shamelessness and dishonour).