“The Iliad“ (Gr: “Iliás“) is an epic poem by the ancient Greek poet Homer, which recounts some of the significant events of the final weeks of the Trojan War and the Greek siege of the city of Troy (which was also known as Ilion, Ilios or Ilium in ancient times). Written in the mid-8th Century BCE, “The Iliad” is usually considered to be the earliest work in the whole Western literary tradition, and one of the best known and loved stories of all time.

Through its portrayal of the Trojan War, the stirring scenes of bloody battle, the wrath of Achilles and the constant interventions of the gods, it explores themes of glory, wrath, homecoming and fate. Moreover, the Homeric epic has provided subjects and stories for many other later Greek, Roman, and Renaissance writings. 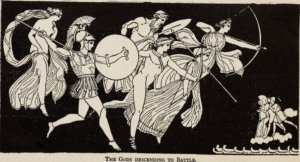 The story covered in “The Iliad” begins nearly ten years into the siege of Troy by the Greek forces, led by Agamemnon, King of Mycenae. The Greeks are quarrelling about whether or not to return Chryseis, a Trojan captive of King Agamemnon, to her father, Chryses, a priest of Apollo.  Agamemnon wins the argument and refuses to give her up and threatens to ransom the girl to her father. In turn, Chryses pleads Apollo to help him, so the offended god plagues the Greek camp with a pestilence.

At the warrior-hero Achilles orders, the Greek soldiers force Agamemnon to return Chryseis in order to appease Apollo and end the pestilence. But, when Agamemnon eventually reluctantly agrees to give her back, he takes in her stead Briseis, Achilles‘s own war-prize concubine. Feeling dishonoured, Achilles wrathfully withdraws both himself and his Myrmidon warriors from the Trojan War.

Testing the loyalty of the remaining Greeks, Agamemnon pretends to order them to abandon the war, but Odysseus encourages the Greeks to pursue the fight. During a brief truce in the hostilities between the Trojan and Greek troops, Paris and Menelaus meet in single combat over Helen, while she and old King Priam of Troy watch from the city walls. Despite the goddess Aphrodite’s intervention on behalf of the over-matched Paris, Menelaus wins. After the fight is over, the goddess Athena who favors the Greeks provokes the Trojans to break the truce, and another battle begins. 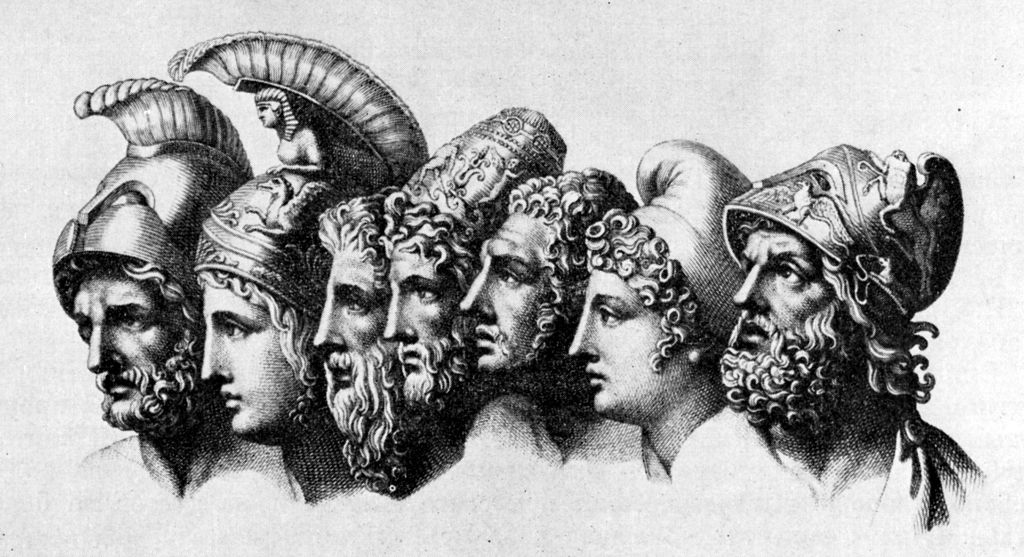 During the new fight, the Greek hero Diomedes, strengthened by Athena, obliterates the Trojans before him. However, in his blind arrogance and blood-lust, he strikes and injures Aphrodite. Meanwhile, in the Trojan castle, despite the misgivings of his wife, Andromache, the Trojan hero, Hector, son of King Priam, challenges the Greek warrior-hero Ajax to single combat, and is almost overcome in battle. Throughout everything, in the background, the various gods and goddesses (particularly Hera, Athena, Apollo and Poseidon) continue to argue among themselves and to manipulate and intervene in the war, despite Zeus’ specific orders to not do so.

Achilles steadfastly refuses to give in to pleas for help from Agamemnon, Odysseus, Ajax, Phoenix and Nestor, declining the offered honours and riches; even Agamemnon‘s belated offer to return Briseis to him. In the meantime, Diomedes and Odysseus sneak into the Trojan camp and wreak havoc. But, with Achilles and his warriors out of battle, the tide appears to begin to turn in favour of the Trojans. Agamemnon is injured in the battle and, despite Ajax‘s efforts, Hector successfully breaches the fortified Greek camp, wounding Odysseus and Diomedes in the process, and threatens to set the Greek ships on fire.

Trying to rectify the situation, Patroclus convinced his friend and lover, Achilles, to dress in Achilles‘ own armour and lead the Myrmidons against the Trojans. The first two times Patroclus launches against the Trojans, he is successful, killing Sarpedon (son of Zeus who participated in the war).  Intoxicated by his success, Patroclus forgets Achilles‘ warning to be careful, and pursues the fleeing Trojans to the walls of Troy. He would have taken the city were it not for the actions of Apollo.

The god of music and the sun, is the first one to strike Patroclus. After that first blow and in the heat of the battle, Hector also finds the disguised Patroclus and, thinking him to be Achilles, fights and (with Apollo’s help) kills him. Menelaus and the Greeks manage to recover Patroclus’s corpse before Hector can inflict more damage.

Distraught at the death of his companion, Achilles then reconciles with Agamemnon and rejoins the battle, destroying all the Trojans before him in his fury. As the ten year war reaches its climax, even the gods join in the battle and the earth shakes with the clamour of the combat.

Dressed in new armour fashioned specially for him by Hephaestus, Achilles takes revenge for his friend Patroclus by slaying Hector in single combat, but then defiles and desecrates the Trojan prince’s corpse for several days. Now, at last, Patroclus’ funeral can be celebrated in what Achilles sees as a fitting manner. Hector‘s father, King Priam, emboldened by his grief and aided by Hermes, recovers Hector‘s corpse from Achilles, and “The Iliad” ends with Hector‘s funeral during a twelve day truce granted by Achilles.

Although attributed to Homer, “The Iliad” is clearly dependent on an older oral tradition and may well have been the collective inheritance of many singer-poets over a long period of time (the historical Fall of Troy is usually dated to around the start of the 12th Century BCE). Homer was probably one of the first generation of authors who were also literate, as the Greek alphabet was introduced in the early 8th Century BCE. We knows this because the language used in his epic poems is an archaic version of Ionic Greek, with admixtures from certain other dialects such as Aeolic Greek. However, it is by no means certain that Homer himself (if in fact such a man ever really existed) actually wrote down the verses.

“The Iliad” was part of a group of ancient poems known as the “Epic Cycle”, most of which are now lost to us. These poems dealt with the history of the Trojan War and the events surrounding it. Whether or not they were written down, we do know that Homer‘s poems (along with others in the “Epic Cycle”) were recited in later days at festivals and ceremonial occasions by professional singers called “rhapsodes“. Interestingly enough, these singers used rhythm staffs in order to create a beat out of the rhythm of the words used in the poems. 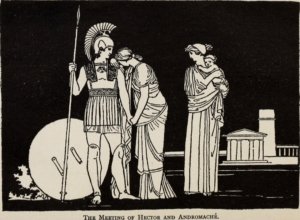 “The Iliad” itself does not cover the early events of the Trojan War, which had occurred ten years before the events described in the poem. The early occurrences of the Trojan war included an attempt to rescue Helen, the wife of King Menelaus of Sparta, after her abduction by the Trojan prince, Paris. Likewise, the death of Achilles and the eventual fall of Troy are not covered in the poem, and these matters are the subjects of other (non-Homeric) “Epic Cycle” poems, which survive only in fragments. “The Odyssey”, a separate work also by Homer, narrates Odysseus‘ decade-long journey home to Ithaca after the end of the Trojan War.

The poem consists of twenty-four scrolls, containing 15,693 lines of dactylic hexameter verse. The entire poem has a formal rhythm that is consistent throughout (making it easier to memorize) and yet varied slightly from line to line (preventing it from being monotonous). Many phrases, sometimes whole passages, are repeated verbatim over and over again throughout “The Iliad”, partly to fulfil the demands of the metre and partly as part of the formulaic oral tradition. In the same way, many of the descriptive phrases that are linked with a certain character (such as “swift-footed Achilles“, “Diomedes of the great war cry“, “Hector of the shining helm”, and “Agamemnon the lord of men”) match the number of syllables in a hero’s name. This is why they are repeated regularly to the extent that they almost seem to become part of the characters’ names themselves.

The immortal gods and goddesses are portrayed as characters in “The Iliad”, displaying individuality and will in their actions. But they are also stock religious figures, sometimes allegorical, sometimes psychological, and their relation to humans is extremely complex. They are often used as a way of explaining how or why an event took place, but they are also sometimes used as comic relief from the war, mimicking, parodying and mocking mortals. Indeed, it is often the gods, not the mortals, who seem casual, petty and small-minded.

The main theme of the poem is that of war and peace, and the whole poem is essentially a description of war and fighting. There is a sense of horror and futility built into Homer‘s epic, and yet, there is a sense of heroism and glory that adds a glamour to the fighting: Homer appears both to abhor war and to glorify it. Frequent similes tell of the peacetime efforts back home in Greece, and serve as contrasts to the war, reminding us of the human values that are destroyed by fighting, as well as what is worth fighting for.

The concept of heroism, and the honour that results from it, is also one of the major themes running through the poem. Achilles in particular represents the heroic code, and his struggle revolves around his belief in an honour system, as opposed to Agamemnon‘s reliance on royal privilege. But, as fighter after heroic fighter enters the war in search of honour and is slain before our eyes, the question always remains as to whether their struggle, heroic or not, is really worth the sacrifice.

“Menin“or “menis“ (“anger“ or “wrath“) is the word that opens “The Iliad”, and one of the major themes of the poem is Achilles coming to terms with his anger and taking responsibility for his actions and emotions.

This site uses Akismet to reduce spam. Learn how your comment data is processed.