Sappho was the quintessential lyric poet of ancient Greece. Although the bulk of her poetry has been lost, she was well-known and greatly admired throughout antiquity as one of the greatest of lyric poets, and her immense reputation has endured through surviving fragments. 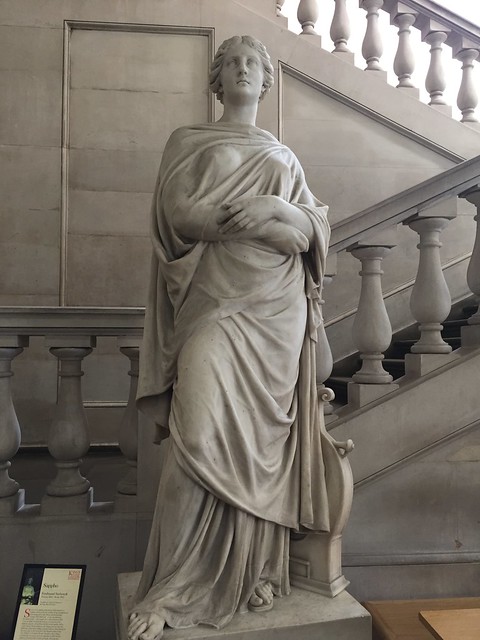 Sappho was born on the Greek island of Lesbos sometime between 630 and 612 BCE (from the evidence of several different conflicting sources) and it seems that she had already become quite famous by around 600 BCE or just after. Many of the biographical fragments we have been able to piece together are taken from her own poetry and may be unreliable, but she probably came from an aristocratic family. She was described by one contemporary as “violet-haired, pure, honey-smiling”, but by another as “small and dark”.

Sappho lived during a period of political turbulence on Lesbos, and it seems that she was exiled from Lesbos to Sicily sometime between 604 and 594 BCE, for reasons which are not clear (her own poetry makes very few political allusions). She may have been married to a wealthy merchant named Cercylas, and it is likely that she had already had a daughter (possibly called Cleïs, after Sappho’s own mother) by the time of the exile. It is not known for sure, but it is often assumed that she later returned to her beloved Lesbos.

It is believed that she died around 570 BCE, although the suggestion that Sappho killed herself by jumping off the Leucadian cliffs for love of a ferryman named Phaon is now considered spurious.

Sappho’s poetry centres to a large extent on passion, infatuation and love for various personages and genders, although it is not known to what extent her poetry was autobiographical. Descriptions of physical acts between women in her works are few and subject to debate, but the words “lesbian” (from the name of the island of her birth) and “sapphic” nevertheless came to be widely applied to female homosexuality beginning in the 19th Century. Homosexuality during her own period was, however, quite widespread, particularly among the inteligentsia and the aristocracy, and considered unexceptional. It seems clear that she loved some of the women of her community, although whether or not the passion was expressed sexually is far from clear.

She was known as the acknowledged chief writer of “wedding songs” in her time. The Library of Alexandria (which tragically burned down in antiquity) apparently collected Sappho’s poetry into nine books, but the surviving proportion is very small with only one poem, the “Hymn to Aphrodite”, surviving in its entirety, along with three other partially complete poems. Sappho organized a group of her young female students into a “thiasos”, a cult that worshipped Aphrodite with songs and poetry, and “Hymn to Aphrodite” was most likely composed for performance within this cult. 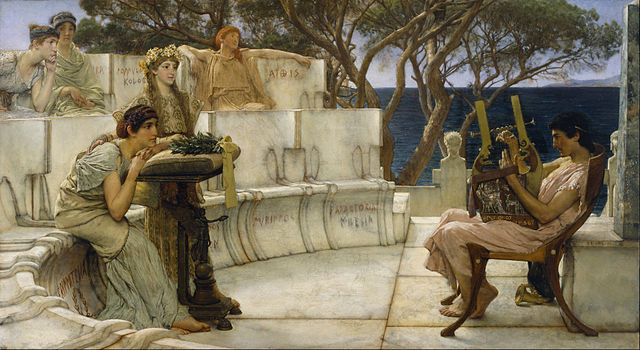 She wrote in a rather difficult and arcane Aeolic Greek dialect (part of the reason why her work was copied less and less as time passed), but her poetry is praised for its clarity of language and simplicity of thought, more than for its wit and rhetoric.