“Ars Poetica” (“The Art of Poetry” or “On the Nature of Poetry”), sometimes known under its original title, “Epistula Ad Pisones” (“Letters to the Pisos”), is a treatise or literary essay on poetics by the Roman poet Horace, published around 18 or 19 BCE.

The poem takes the form of a letter of advice on the pursuit of literature, addressed to a father and two sons, known only as the Pisos, whose identity is uncertain. The work is often split up into sections as follows (although other splits have also been suggested): 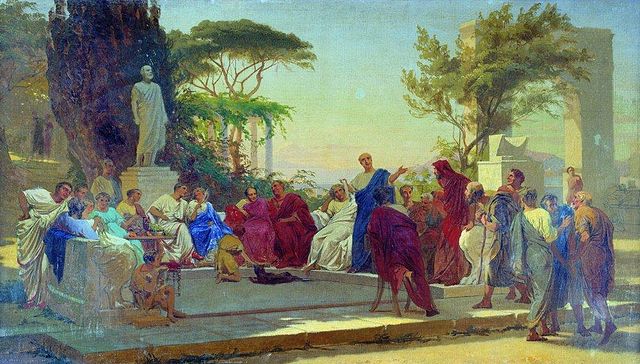 The actual purpose of the “Ars Poetica” has puzzled critics. As a treatise, it is far from systematic and, whereas Aristotle’s “Poetics” is analytical and descriptive, Horace is impressionistic, personal and allusive. The transitions from one subject to another seem to occur abruptly, and the subjects are arranged quite haphazardly. Its concentration on the epic and dramatic forms also seems somewhat irrelevant to the contemporary Roman literary scene of his day. However, the lively autobiographical approach of the “Ars Poetica” and its expression of personal standards in literature make it unique as a work of criticism in the ancient world.

A few quotes in particular from the work have passed into common literary parlance, including: “in medias res” (literally, “in the middle of things”, describing a popular narrative technique that appears frequently in ancient epics and remains popular to this day, where the narrative starts in the middle of the story and the characters, setting and conflict are introduced through a series of flashbacks or through characters relating past events to each other); “bonus dormitat Homerus” (literally, “the good Homer nods”, an indication that even the most skilled poet can make continuity errors); “purpureus pannus” (literally, “the purple patch”, describing passages, or sometimes entire literary works, written in prose so overly extravagant, ornate or flowery as to break the flow and draw attention to itself); and “ut pictura poesis” (literally “as painting, so poetry”), meaning that poetry merits the same careful interpretation that was reserved for painting in Horace‘s day).

In later ages, the work exercised a great influence on Renaissance European literature, notably on French drama through Nicholas Boileau’s “L’Art Poétique” of 1674, which was written in imitation of Horace’s work. It was first translated into English by Ben Jonson in 1640.