“Pharsalia” (also kown as “De Bello Civili” or “On the Civil War”) is an epic poem in ten books by the Roman poet Lucan, left unfinished on the poets’ death in 65 CE. Although incomplete, it is often considered the greatest epic poem of the Silver Age of Latin literature, and it tells the story of the civil war between Julius Caesar and the forces of the Roman Senate led by Pompey the Great. 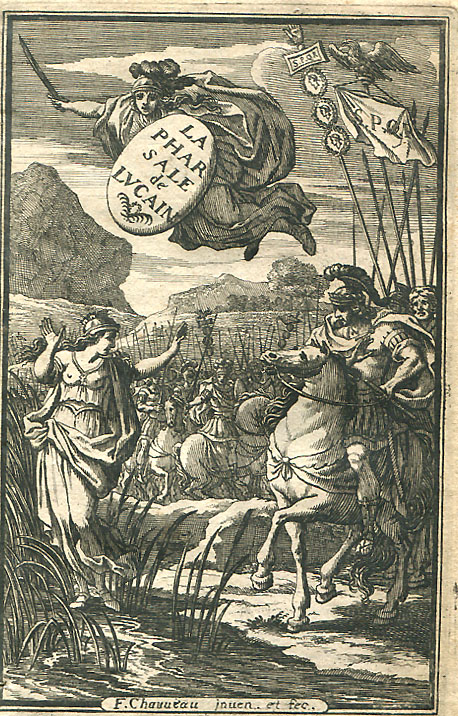 The poem begins with a flattering dedication to the Emperor Nero and a brief lament that Romans should ever fight against Romans. Caesar is introduced in northern Italy and, despite an urgent plea from the Spirit of Rome to lay down his arms, Caesar crosses the Rubicon, effectively declaring a state of war. He rallies his troops and marches south to Rome (joined by his supporter Gaius Scribonius Curio along the way), where there is panic, terrible portents and visions of the disaster to come.

Some old veterans present a lengthy interlude regarding the previous civil war that pitted Marius against Sulla. The Roman statesman Cato is introduced as a heroic man of principle and he argues to Brutus that perhaps it is better to fight than do nothing, abhorrent as civil war is. After siding with Pompey, as the lesser of two evils, Cato remarries his ex-wife and heads to the field. Caesar continues south through Italy, despite delays from Domitius’ brave resistance, and attempts a blockade of Pompey at Brundisium, but the general makes a narrow escape to Greece.

As his ships sail, Pompey is visited in a dream by Julia, his dead wife and Caesar’s daughter. Caesar returns to Rome and plunders the city, while Pompey reviews potential foreign allies. Caesar then heads for Spain, but his troops are detained at the lengthy siege of Massilia (Marseilles), although the city ultimately falls after a bloody naval battle.

Caesar carries out a victorious campaign in Spain against Afranius and Petreius. Meanwhile, Pompey’s forces intercept a raft carrying Caesarians, who prefer to kill each other rather than be taken prisoner. Curio launches an African campaign on Caesar’s behalf, but he is defeated and slain by the African King Juba.

The Senate in exile confirms Pompey to be the true leader of Rome, and Appius consults the Delphic oracle to learn of his fate in the war, leaving with a misleading prophesy. In Italy, after defusing a mutiny, Caesar marches to Brundisium and sails across the Adriatic to meet Pompey’s army. However, only a portion of Caesar’s troops complete the crossing when a storm prevents further transit. Caesar tries personally to send a message back, and is himself nearly drowned. Finally, the storm subsides, and the armies face each other at full strength. With battle at hand, Pompey sends his wife to safety on the island of Lesbos. 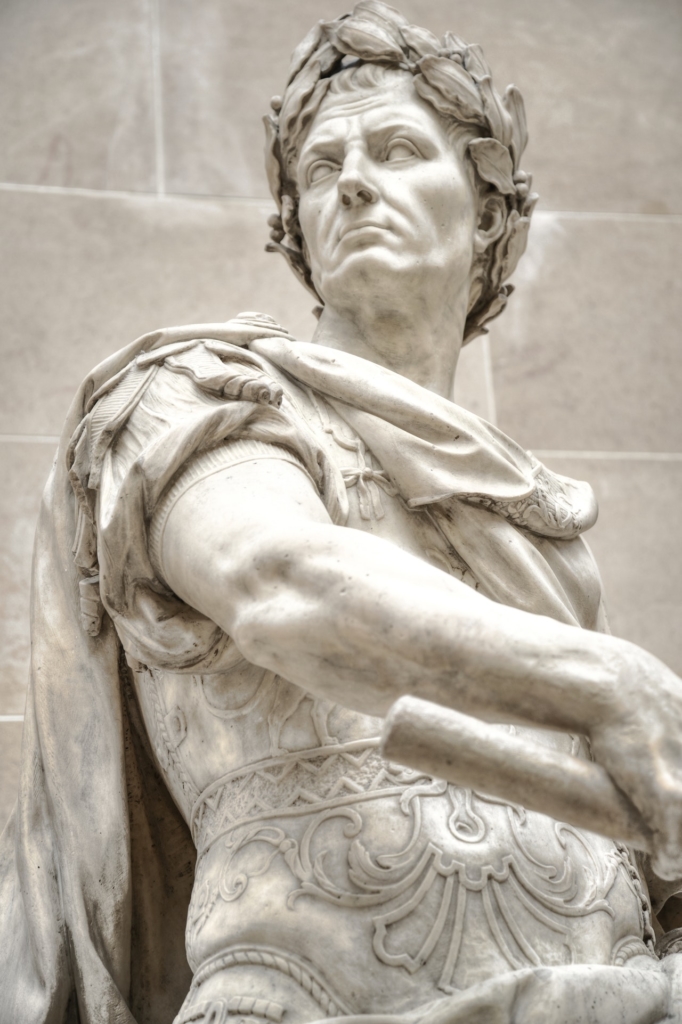 Pompey’s troops force Caesar’s armies (despite the heroic efforts of the centurion Scaeva) to fall back to the wild terrain of Thessaly, where the armies wait for battle the next day at Pharsalus. Pompey’s son, Sextus, consults the powerful Thessalian witch, Erictho, in order to find out the future. She brings back to life the corpse of a dead soldier in a terrifying ceremony, and he predicts Pompey’s defeat and Caesar’s eventual assassination.

The soldiers press for battle, but Pompey is reluctant to engage until Cicero convinces him to attack. In the event, the Caesarians are victorious, and the poet laments the loss of liberty. Caesar is especially cruel as he mocks the dying Domitius and forbids cremation of the dead Pompeians. The scene is punctuated by a description of wild animals gnawing at the corpses, and a lament for “ill-fated Thessaly”.

Pompey himself escapes from the battle to reunite with his wife at Lesbos, and then goes on to Cilicia to consider his options. He decides to enlist aid from Egypt, but the Pharaoh Ptolemy is fearful of retribution from Caesar and plots to murder Pompey when he lands. Pompey suspects treachery but, having consoled his wife, he rows alone to the shore to meet his fate with Stoic poise. His headless body is flung into the ocean but washes up on shore and receives a humble burial from Cordus.

Pompey’s wife mourns her husband, and Cato takes up leadership of the Senate’s cause. He plans to regroup and heroically marches the army across Africa to join forces with King Juba. On the way, he passes an oracle but refuses to consult it, citing Stoic principles. On his way to Egypt, Caesar visits Troy and pays respects to his ancestral gods. On his arrival in Egypt, the Pharaoh’s messenger presents him with the head of Pompey, at which Caesar feigns grief to hide his joy at Pompey’s death.

While in Egypt, Caesar is beguiled by Pharaoh’s sister, Cleopatra. A banquet is held and Pothinus, Ptolemy’s cynical and bloodthirsty chief minister, plots to assassinate Caesar, but is himself killed in his surprise attack on the palace. A second attack comes from Ganymede, an Egyptian noble, and the poem breaks off abruptly as Caesar is fighting for his life. 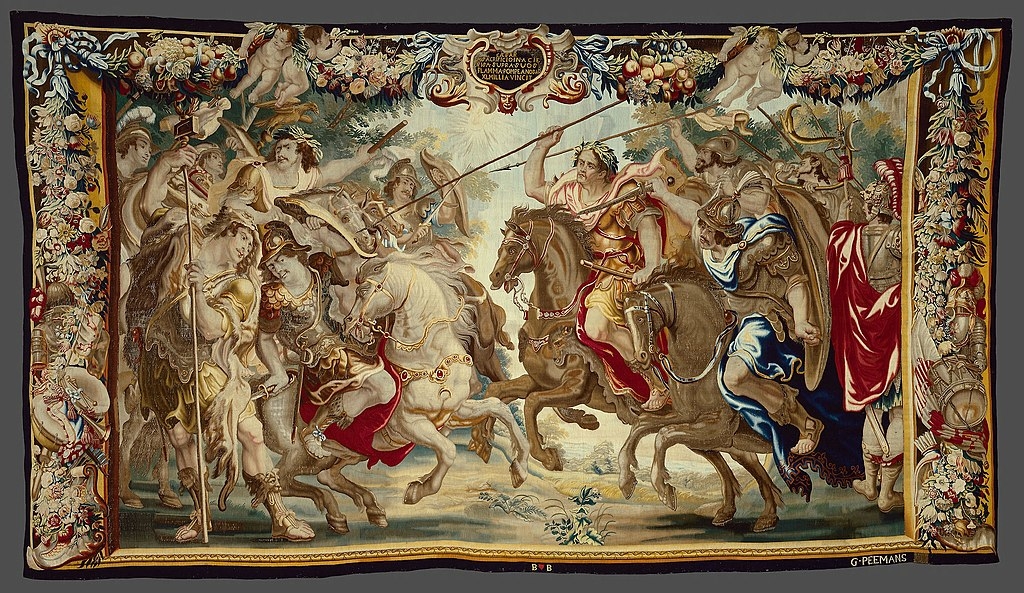 Lucan began the “Pharsalia” around 61 CE, and several books were in circulation before the Emperor Nero had a bitter falling out with Lucan. He continued to work on the epic, though, despite Nero’s prohibition against publication of any of Lucan‘s poetry. It was left unfinished when Lucan was compelled to commit suicide for his supposed participation in the Pisonian conspiracy in 65 CE. A total of ten books were written and all survive, although the tenth book breaks off abruptly with Caesar in Egypt.

The title, “Pharsalia”, is a reference to the Battle of Pharsalus, which occurred in 48 BCE near Pharsalus, Thessaly, in northern Greece. However, the poem is also commonly known under the more descriptive title “De Bello Civili” (“On the Civil War”).

Although the poem is notionally a historical epic, Lucan was actually more concerned with the significance of events rather than the events themselves. In general, the events throughout the poem are described in terms of insanity and sacrilege, and most of the main characters are terribly flawed and unattractive: Caesar, for example, is cruel and vindictive, while Pompey is ineffective and uninspiring. The battle scenes are not depicted as glorious occasions full of heroism and honour, but rather as portraits of bloody horror, where nature is ravaged in order to build terrible siege engines and where wild animals tear mercilessly at the flesh of the dead.

The grand exception to this generally bleak portrait is the character of Cato, who stands as a Stoic ideal in the face of a world gone mad (he alone, for example, refuses to consult oracles in an attempt to know the future). Pompey also seems transformed after the Battle of Pharsalus, becoming a kind of secular martyr, calm in the face of certain death on his arrival in Egypt. Thus, Lucan elevates Stoic and Republican principles in sharp contrast to the imperialist ambitions of Caesar, who, if anything, becomes an even greater monster after the decisive battle.

Given Lucan‘s clear anti-imperialism, the flattering dedication to Nero in Book 1 is somewhat puzzling. Some scholars have tried to read these lines ironically, but most see it as a traditional dedication written at a time before the true depravity of Lucan‘s patron was revealed. This interpretation is supported by the fact that a good portion of the “Pharsalia” was in circulation before Lucan and Nero had their falling out. 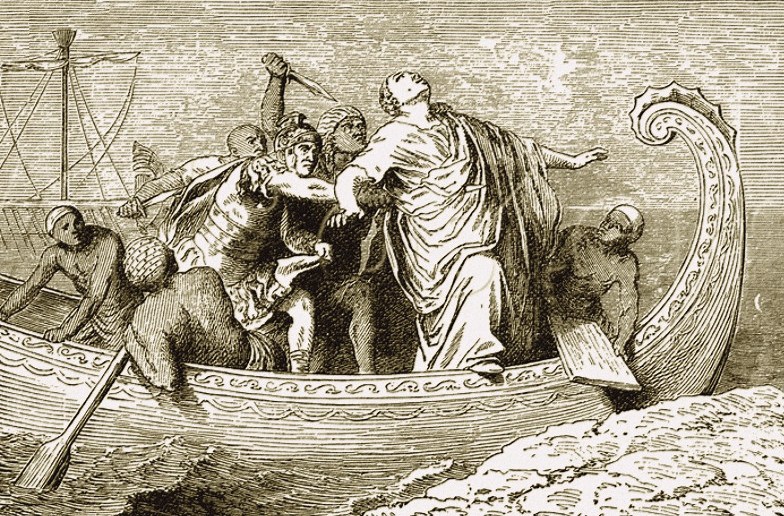 Lucan was heavily influenced by Latin poetic tradition, notably Ovid‘s “Metamorphoses” and Vergil‘s “Aeneid”. The latter is the work to which the “Pharsalia” is most naturally compared and, although Lucan frequently appropriates ideas from Vergil‘s epic, he often inverts them in order to undermine their original, heroic purpose. Thus, while
Vergil‘s descriptions may highlight optimism toward the future glories of Rome under Augustan rule, Lucan may uses similar scenes to present a bitter and gory pessimism concerning the loss of liberty under the coming empire.

Lucan  presents his narrative as a series of discrete episodes, often without any transitional or scene-changing lines, much like the sketches of myth strung together in Ovid‘s “Metamorphoses”, in contrast to the strict continuity followed by Golden Age epic poetry.

Like all Silver Age poets and most upper-class young men of the period, Lucan  was well trained in rhetoric, which clearly informs many of the speeches in the text. The poem is also punctuated throughout with short, pithy lines or slogans known as “sententiae”, a rhetorical tactic commonly used by most Silver Age poets, used to grab the attention of a crowd interested in oratory as a form of public entertainment, perhaps the most famous of these being, “Victrix causa deis placuit sed Victa Catoni” (“The victor’s cause pleased the gods, but the vanquished pleased Cato”).

“Pharsalia” was very popular in Lucan’s own day, and remained a school text in late antiquity and during the Middle Ages. Dante includes Lucan among other classical poets in the first circle of his “Inferno”. The Elizabethan playwright Christopher Marlowe first published a translation of Book I, while Thomas May followed with a complete translation into heroic couplets in 1626, and even followed up with a Latin continuation of the incomplete poem.