“Ars Amatoria” (“The Art of Love”) is a collection of 57 didactic poems (or, perhaps more accurately, a burlesque satire on didactic poetry) in three books by the Roman lyric poet Ovid, written in elegiac couplets and completed and published in 1 CE. The poem provides teaching in the areas of how and where to find women (and husbands) in Rome, how to seduce them and how to prevent others from stealing them.

A very brief general summary of the three books of the “Ars Amatoria” may be listed as follows: 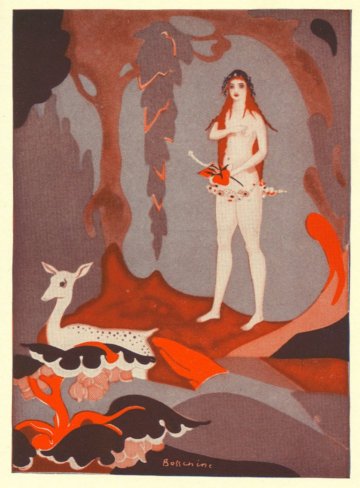 Part I: His task.
Part II: How to find her.
Part III: Search while you are out walking.
Part IV: At the theatre.
Part V: At the races or the circus.
Part VI: Triumphs are good too.
Part VII: At the dinner table.
Part VIII: At the beach.
Part IX: How to win her.
Part X: First secure the maid.
Part XI: Do not forget her birthday.
Part XII: Write and make promises.
Part XIII: Be whereever she is.
Part XIV: Look presentable.
Part XV: At dinner be bold.
Part XVI: Promise and deceive.
Part XVII: Tears, kisses and taking the lead.
Part XVIII: Be pale and be wary of your friends.
Part XIX: Be flexible.

Part I: His task.
Part II: You need gifts of mind.
Part III: Be gentle and good tempered.
Part IV: Be patient and comply.
Part V: Do not be faint-hearted.
Part VI: Win over the servants.
Part VII: Give her little tasteful gifts.
Part VIII: Favour her and compliment her.
Part IX: Comfort her in sickness.
Part X: Let her miss you (but not for too long).
Part XI: Have other friends (but be careful).
Part XII: On the use of aphrodisiacs.
Part XIII: Stir her jealousy.
Part XIV: Be wise and suffer.
Part XV: Respect her freedom.
Part XVI: Keep it secret.
Part XVII: Do not mention her faults.
Part XVIII: Never ask about her age.
Part XIX: Do not rush.
Part XX: The task is complete (for now…). 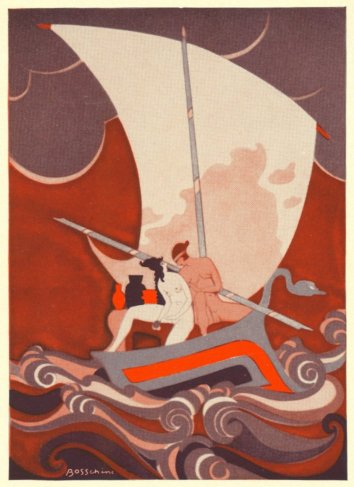 Part I: Now it is time to teach the girls.
Part II: Take care with how you look.
Part III: Taste and elegance in hair and dress.
Part IV: Make-up, but in private.
Part V: Conceal your defects.
Part VI: Be modest in laughter and movement.
Part VII: Learn music and read the poets.
Part VIII: Learn dancing and games.
Part IX: Be seen around.
Part X: Beware of false lovers.
Part XI: Take care with letters.
Part XII: Avoid the vices, favour the poets.
Part XIII: Try young and older lovers.
Part XIV: Use jealousy and fear.
Part XV: Play cloak and dagger.
Part XVI: Make him believe he is loved.
Part XVII: Watch how you eat and drink.
Part XVIII: And so to bed….

The first two books of Ovid‘s “Ars Amatoria” were published around 1 BCE, with the third (dealing with the same themes from the female perspective) added the next year in 1 CE. The work was a great popular success, so much so that the poet wrote an equally popular sequel, “Remedia Amoris”(“Remedies for Love”), soon after, which offered stoic advice and strategies on how to avoid being hurt by love feelings and how to fall out of love. 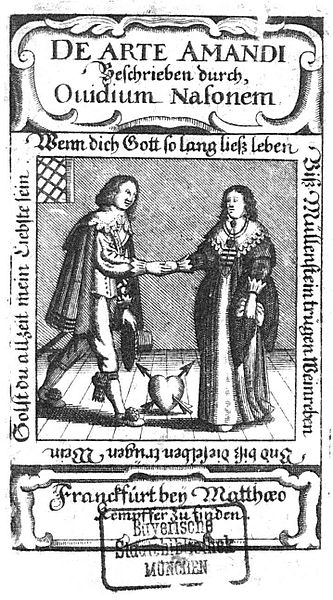 It was not, however, universally acclaimed, and there are accounts of some listeners walking out of early readings in disgust. Many have assumed that the bawdiness and licentiousness of the “Ars Amatoria”, with its celebration of extramarital sex, was largely responsible for Ovid‘s banishment from Rome in 8 CE by the Emperor Augustus, who was attempting to promote a more austere morality at that time. However, it is more probable that Ovid was somehow caught up in factional politics connected with the succession and/or other scandals (Augustus’ adopted son, Postumus Agrippa, and his granddaughter, Julia, were both banished at around the same time). It is possible, however, that the “Ars Amatoria” may well have been used as the official excuse for the relegation.

Although the work does not generally give any immediately usable practical advice, rather employing cryptic allusions and treating the subject matter with the range and intelligence of urbane conversation, the superficial brilliance of the poetry is nevertheless dazzling. The standard situations and clichés of the subject are treated in a highly entertaining way, spiced with colourful details from Greek mythology, everyday Roman life and general human experience.

Through all his ironic discourse, though, Ovid avoids becoming outright ribald or obscene, and sexual matters per se are only dealt with in abbreviated form towards the end of each book, although even here Ovid retains his style and his discretion, avoiding any pornographic tinge. For example, the end of the second book deals with the pleasures of simultaneous orgasm, and the end of the third part discusses various sexual positions, although in a rather flippant and tongue-in-cheek manner.

Appropriately for its subject, the poem is composed in the elegiac couplets of love poetry, rather than the dactyllic hexameters more usually associated with didactic poetry. Elegiac couplets consist of alternating lines of dactylic hexameter and dactylic pentameter: two dactyls followed by a long syllable, a caesura, then two more dactyls followed by a long syllable.

The literary brilliance and popular accessibility of the work has ensured that it has remained a widely-read source of inspiration, and it was included in the syllabuses of medieval European schools in the 11th and 12th Centuries. However, it has also subsequently fallen victim to outbursts of moral opprobrium: all of Ovid‘s works were burned by Savonarola in Florence, Italy in 1497; Christopher Marlowe’s translation of “Ars Amatoria” was banned in 1599; and another English translation was seized by US Customs as late as 1930.