“Epistulae VI” (“Letters 6”) is the sixth of ten books of letters by the Roman lawyer and author Pliny the Younger, mainly written around 106 to 107 CE. Of these, Letters 16 and 20 are the most famous (and longest) ones, written to the historian Tacitus and describing the eruption of Mount Vesuvius when he was a boy in August of 79 CE, as well as the death of his uncle, Pliny the Elder, in a rescue attempt. 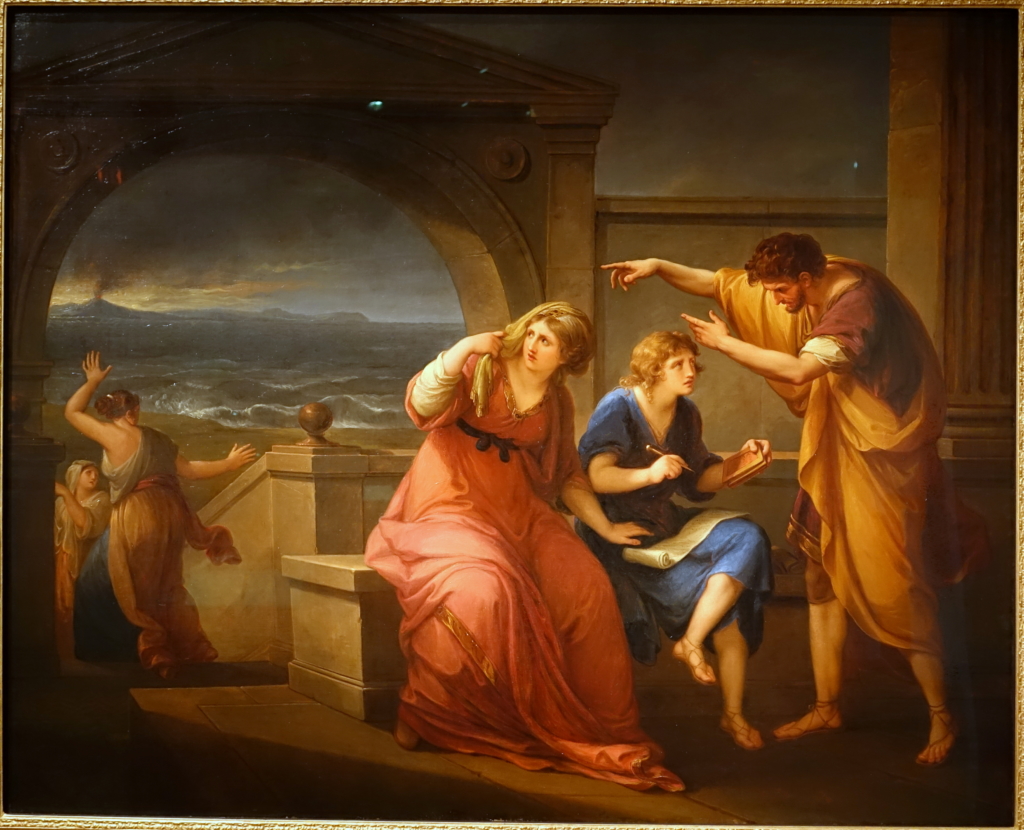 begins Letter VI.16 by mentioning that the well-known historian Tacitus had previously asked him for an account of the death of his illustrious uncle, Pliny the Elder, and that he looked on the inclusion of such an account in a history book by Tacitus as the best way to immortalize the memory of his uncle.

He recounts how Pliny the Elder (along with Pliny the Younger himself and his mother) was stationed at Misenum at the time (August 79 CE), in his capacity as commander of the fleet. In the afternoon of August 24th, his mother pointed out a cloud of unusual size and appearance (similar in shape to a pine tree, rising on a very long “trunk” from which spread “branches”, mainly white but with dark patches of dirt and ash), apparently rising from a distant mountain across the bay, which later proved to be Mount Vesuvius.

His uncle was intrigued and determined to see it from closer at hand, and made ready a boat, the young Pliny staying to complete a writing exercise his uncle had set him. Just as he was leaving, though, a letter arrived from Tascius’ wife, Rectina, who lived at the foot of Vesuvius and was terrified by the looming danger. Pliny the Elder then changed his plans, and launched an expedition of rescue (both of Rectina, and if possible of any others living on the populous shore near Vesuvius), rather than one of scientific inquiry. Thus, he hurried towards a place from which many others were fleeing, bravely holding his course directly into the danger, all the while dictating notes on the phenomenon.

As they neared the volcano, ash began falling onto the ships, and then small pieces of pumice and finally rocks, blackened, burned and shattered by the fire. He paused for a moment, wondering whether to turn back, as his helmsman urged him, but with a cry of, “Fortune favours the brave, head for Pomponianus”, he forged on.

At Stabiae, on the other side of the gently curving bay, he met up with Pomponianus, who had his ships loaded but was trapped there by the very wind that had carried Pliny’s uncle towards him. Pliny the Elder bathed and dined, and even pretended to sleep, trying to lessen the other’s fear by showing his own apparently carefree unconcern. 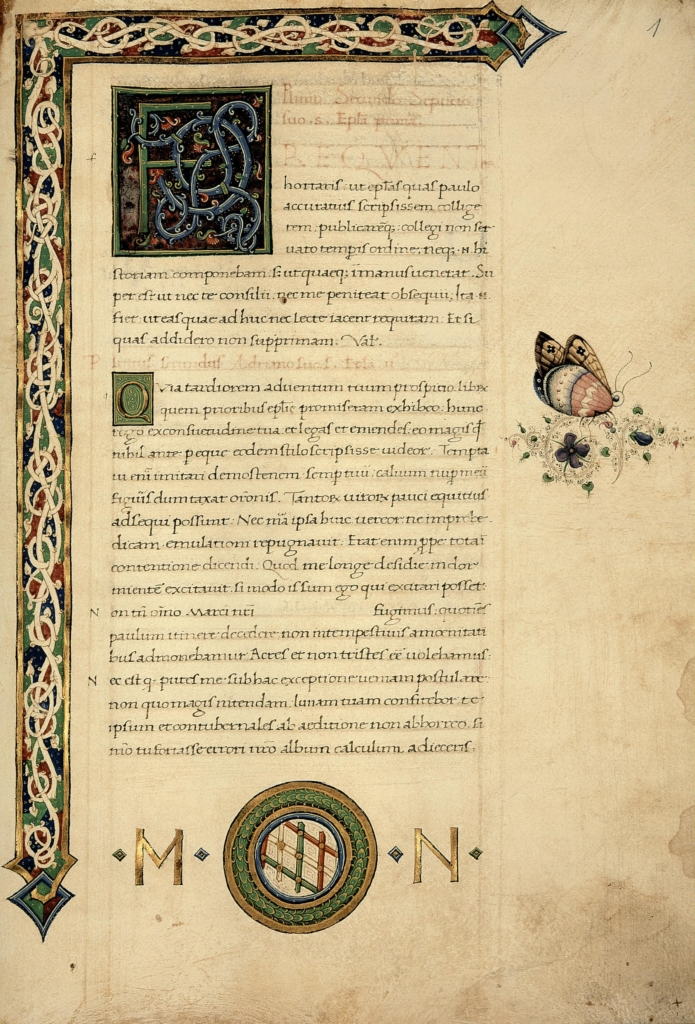 By now, broad sheets of flame were lighting up many parts Vesuvius, all the more vivid in the darkness of the night. The mixture of ash and stones from the volcano gradually built up more and more outside the house, and the men discussed whether to remain under cover (despite the buildings being rocked by a series of strong tremors, and appearing to have come loose from their foundations and to be sliding around) or to risk the ash and flying debris in the open air.

They finally chose the latter, and headed down to the shore with pillows tied on top of their heads as protection against the shower of rock. However, the sea remained as rough and uncooperative as before, and soon there was a strong smell of sulphur, followed by the flames themselves. Pliny the Elder, never physically strong, found his breathing obstructed by the dust-laden air, and eventually his body simply shut down. When daylight finally came again, two days after he died, his body was found untouched and unharmed, in the clothing that he had worn, appearing more asleep than dead.

Letter VI.20 describes Pliny the Younger’s own activities in Misenum during the eruption, in response to a request for more information by Tacitus. He recounts how there had been tremors for many days before his uncle had sent off for Vesuvius (a common occurrence in Campania, and usually no cause for panic), but that night the shaking grew much stronger. The young seventeen-year old tried Pliny to reassure his worried mother, and returned to his study of a volume of Livy, despite the scoldings of a friend of his uncle’s for his apparent lack of concern.

The next day, he and his mother (along with many others from the town) decide to move away from the buildings, worried about possible collapses. Their carts were rolling this way and that, despite being on flat ground, and it seemed as though the sea was being sucked backwards, almost as though it were being pushed back by the shaking of the land. Huge dark clouds twisted and roiled, eventually stretching down to the ground and completely covering the sea, occasionally opening to reveal huge figures of flame, like lightning, but bigger.

Together, Pliny and his mother continued to put as much distance as they could between themselves and the centre of the conflagration, despite his mother urgings that he should go on alone as he would make better speed on his own. A dense cloud of dust pursued and eventually overtook them, and they sat down in the absolute darkness it brought, as people around them called out for their lost loved ones and some lamented the ending of the world. The fire itself actually stopped some distance away, but a new wave of darkness and ash came, seeming to crush them under its weight.

Eventually, the cloud thinned out and dwindled to no more than smoke or fog, and a weak sun finally shone though with a lurid glow, like after an eclipse. They returned to Misenum, which was buried in ash like snow, the earth still quaking. A number of people had gone mad and were shouting out terrifying prognostications. They refused to leave the town until they had heard news of Pliny ’s uncle, although new dangers were expected hourly.

Pliny ends his account with an apology to Tacitus that his story is not really the material of history, but offers it to him anyway to use as he sees fit.

The letters of Pliny the Younger are a unique testimony of Roman administrative history and everyday life in the 1st Century CE, and some commentators even consider that Pliny was the initiator of a whole new genre of literature: the letter written for publication. They are personal missives directed to his friends and associates (including literary figures like the poet Martial, the biographer Suetonius, the historian Tacitus and his famous uncle Pliny the Elder, author of the encyclopedic “Historia Naturalis”).

The letters are models of graceful thought and refined expression, each of them dealing with a single topic, and generally ending with an epigrammatic point. Although they dispense with objectivity, they are no less valuable as a historical record of the times, and as a picture of the varied interests of a cultivated Roman gentleman. 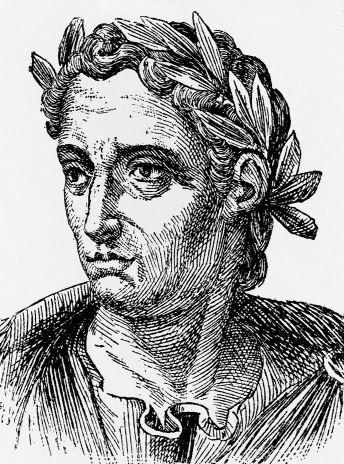 The sixth book of letters is perhaps best known for Pliny’s detailed account of the eruption of Mount Vesuvius in August of 79 CE, during which his uncle, Pliny the Elder, died. In fact, Pliny‘s attention to detail in the letters about Vesuvius is so keen that modern vulcanologists describe that type of eruption as Plinian.

The two letters regarding the eruption (Nos. 16 and 20) were written to the historian Tacitus, a close friend, who had requested from Pliny a detailed account of his uncle’s death for inclusion in his own historical work. His account begins with the first warning of the eruption, as a cloud of unusual size and appearance, while his uncle was stationed at nearby Misenum, in active command of the fleet. Pliny then goes on to describe his uncle’s failed attempt to study further the eruption (famously exclaiming “Fortune favours the brave”), as well as to save the lives of refugees, using the fleet under his command.

The second letter is in response to a request from Tacitus for more information, and is given from the slightly more distant perspective of Pliny the Younger himself, as he and his mother fled the effects of the eruption.