“The Suppliants” (Gr: “Hiketides”; Lat: “Supplices”) is a tragedy by the ancient Greek playwright Aeschylus. It is sometimes known as “The Suppliant Women” or “The Suppliant Maidens”. Along with his “The Persians”, it is one of the Western world’s oldest extant dramas. The myth of Danaus and his fifty daughters, on which the story is based, is essentially a foundation legend (or rather a re-foundation legend) of Argos, one of the foremost Mycenaean cities of the Peloponnesus. It shoud not be confused with Euripides‘ play, also called “The Suppliants”, which deals with the struggle of Adrastus and the Argive mothers against Creon of Thebes to allow the bodies of the Argive invaders to receive a proper burial.

The fifty daughters of Danaus, collectively known as the Danaides (who make up the Chorus of the play), are fleeing with their father in an attempt to escape a forced marriage to their Egyptian cousins, the fifty sons of the usurping King Aegyptus, Danaus‘ twin brother.

When they reach Argos, Danaus and his daughters ask the kind but timid King Pelasgus for his protection. At first, he refuses, pending the decision of the Argive people on the matter, but the people of Argos agree to protect the fugitives, to great rejoicing among the Danaides.

Almost immediately, however, the fleet of Egyptian suitors is seen approaching, and a herald blusters and threatens the Danaides and attempts to force them to return to their cousins for marriage, finally resorting to attempts to physically drag them away. King Pelasgus intervenes and threatens the herald, interposing with an armed force to drive off the Egyptians and thereby save the suppliants. He entreats the Danaides to remain within the safety of the walls of the city.

The play ends with the Danaides retreating into the the safety of the Argive walls, as Danaus urges them to prayer and thanksgiving to the Greek gods, and to maidenly modesty. 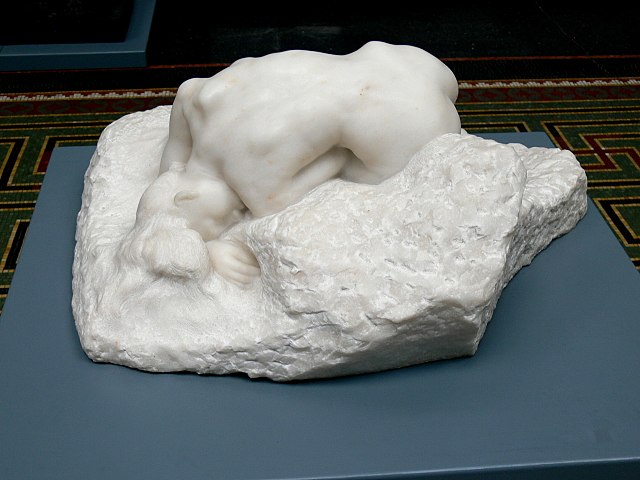 “The Suppliants” was once thought to be the earliest surviving play by Aeschylus (largely due to the relatively anachronistic function of the Chorus as the protagonist of the drama), but recent evidence places it after “The Persians” as Aeschylus‘ second extant play. It is still, however, one of the oldest extant dramas from ancient Greece, and in its rudimentary general structure it probably resembles the lost works of Choerilus, Phrynichus, Pratinas and the 6th Century BCE pioneers of drama. Because the suppliant women are essentially both the Chorus and the protagonist, it is perhaps not surprising that choral lyrics occupy more than half the play.

It was probably first performed some time after 470 BCE (possibly as late as 463 BCE) as the first play in a trilogy which included the lost plays “The Sons of Aegyptus” and “The Daughters of Danaus” (both of which continued the story of “The Suppliants” and the re-settlement of Argos), followed by the lost satyr play “Amymone”, which comically portrayed one of the Danaides’ seduction by Poseidon.

“The Suppliants” does not conform to our expectations of traditional Greek tragic drama in that it has neither hero, nor downfall, nor even tragic conclusion. Instead, the play portrays unresolved conflicts of sexuality, love and emotional maturity. It also pays tribute to the democratic undercurrents running through Athens in advance of the establishment of a democratic government in 461 BCE, and the insistence of King Pelasgus on consulting the people of Argos is a distinct nod in favour of democracy.

It should not to be confused with “The Suppliants” of Euripides (which deals with Theseus‘ struggle against Creon of Thebes in order to allow of the the bodies of the brothers Polynices and Eteocles to receive a proper burial).