“Aesop’s Fables” (Lat: “Aesopica”) refers to a collection of well-known fables credited to Aesop, a slave and story-teller who lived in ancient Greece in the 6th Century BCE. It is also sometimes used as a blanket term for any collections of short fables (i.e. any brief story used to illustrate a moral lesson), especially beast fables involving anthropomorphic animals. They have been popular throughout history, and remain a popular choice for moral education of children even today.

There are many different collections of fables described as “Aesop’s Fables”, some numbering up to 600, but among the best known are: 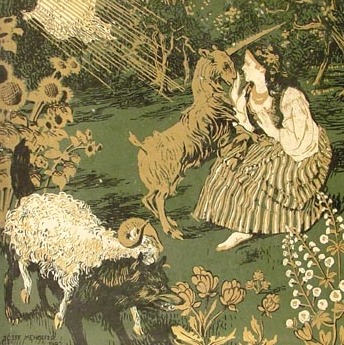 It is largely due to the claims of the 5th Century BCE Greek historian Herodotus that the “Fables” were attributed to Aesop, but Aesop‘s existence and his authorship of the fables was widely accepted thereafter. In fact, the “Fables” were probably merely compiled by Aesop from existing fables (for example, many of the fables attributed to him have since been found on Egyptian papyri known to date between 800 and 1,000 years before Aesop‘s time).

The 4th Century BCE Peripatetic philosopher Demetrius of Phaleron compiled “Aesop’s Fables” into a set of ten books (since lost) for the use of orators, and even Socrates is reported to have whiled away his jail time turning some of them into verses. The first extensive translation of Aesop into Latin was done by Phaedrus, a freedman of Augustus, in the 1st Century CE.

The collection which has come down to us under the name of “Aesop’s Fables” evolved from the late Greek version of Babrius (who turned them into choliambic verses at some uncertain time between the 3rd Century BCE and the 3rd Century CE), via subsequent translations in the 9th Century CE by Ignatius Diaconus (who also added some stories from the Sanskrit “Panchatantra”), and then the definitive complation by the 14th Century monk, Maximus Planudes.