“Alcestis“ (Gr: “Alkestis“) is a tragedy by the ancient Greek playwright Euripides, first produced at the Athens City Dionysia dramatic festival in 438 BCE (at which it won second prize). It is the oldest surviving work by Euripides, although at the time of its first performance he had already been producing plays for some 17 years. It presents the story of Alcestis, the wife of Admetus, who according to Greek mythology sacrificed her own life in order to bring her husband back from the dead. 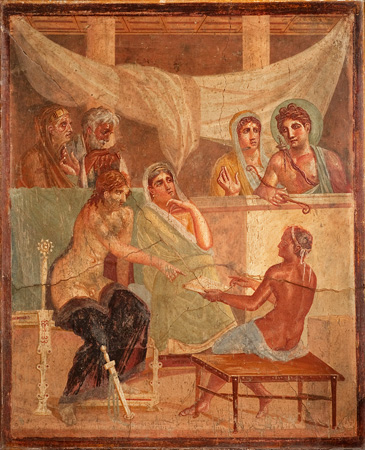 In the prologue to the play, the god Apollo explains some of the prior events leading up to the moment: Apollo had once persuaded the Fates to grant King Admetus of Pherae in Thessaly the privilege of living past the allotted time of his death, (his life was to have been cut short after he had upset Apollo’s sister, Artemis) as recompense for the hospitality the King had shown Apollo during the time he was exiled from Mount Olympus.

However, the gift came with a price: Admetus must find someone to take his place when Death comes to claim him. Admetus’ old parents were unwilling to help him and, as the time of Admetus’ death approached, he had still not found a willing replacement. Finally, his devoted wife Alcestis agreed to be taken in his stead, because she wished not to leave her children fatherless or to be left herself bereft of her beloved husband.

At the start of the play, she is close to death and Thanatos (Death) arrives at the palace, dressed in black and carrying a sword, ready to lead Alcestis to the Underworld. He accuses Apollo of trickery when he helped Admetus cheat death in the first place and Apollo tries to defend and excuse himself in a heated exchange of stychomythia (short, quick alternating lines of verse). Eventually Apollo storms off, prophesying that a man would come who would wrestle Alcestis away from Death. Unimpressed, Thanatos proceeds into the palace to claim Alcestis.

The Chorus of fifteen old men of Pherae lament the passing of Alcestis, but complain that they are still unsure whether or not they should be performing mourning rituals for the good queen yet. A maidservant gives them the confusing news that she is both alive and dead, standing on the brink of life and death, and joins the Chorus in praising Alcestis‘ virtue. She describes how Alcestis has made all her preparations for death and her farewells to her sobbing children and husband. The Chorus leader enters the palace with the maidservant in order to witness the further developments. 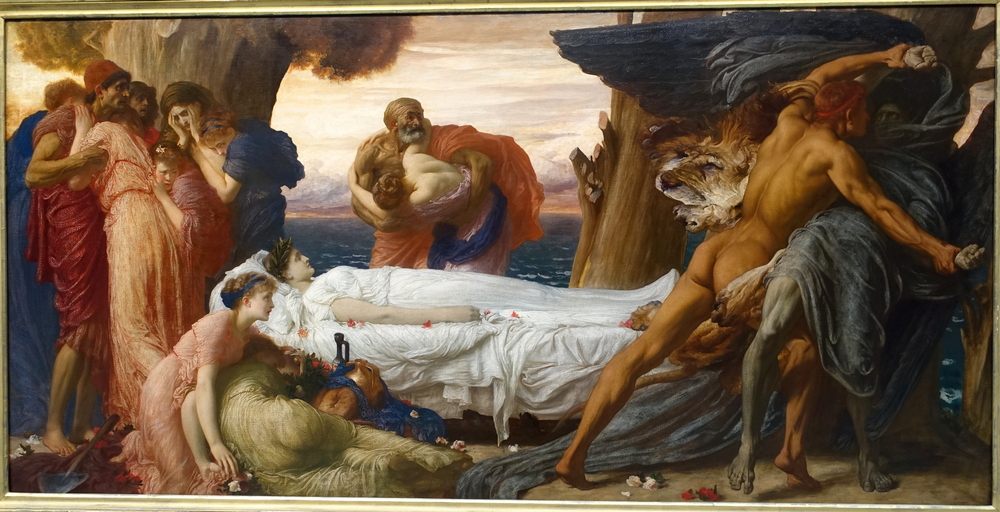 Within the palace, Alcestis, on her death-bed, entreats Admetus never to remarry again after her death and allow a vicious and resentful stepmother to take charge of their children, and never to forget her. Admetus readily agrees to all this, in return for his wife’s sacrifice, and promises to lead a life of solemnity in her honour, abstaining from the usual merrymaking of his household. Satisfied with his vows and and at peace with the world, Alcestis then dies.

The hero Heracles, an old friend of Admetus, arrives at the palace, ignorant of the sorrow that has befallen the place. In the interests of hospitality, the king decides not to burden Heracles with the sad news, assuring his friend that the recent death was simply that of an outsider of no account, and instructs his servants to likewise pretend that nothing is amiss. Admetus therefore welcomes Heracles with his usual lavish hospitality, thus breaking his promise to Alcestis to abstain from merrymaking. As Heracles gets more and more drunk, he irritates the servants (who are bitter at not being allowed to mourn their beloved queen properly) more and more until, finally, one of them snaps at the guest and tells him what has really happened. 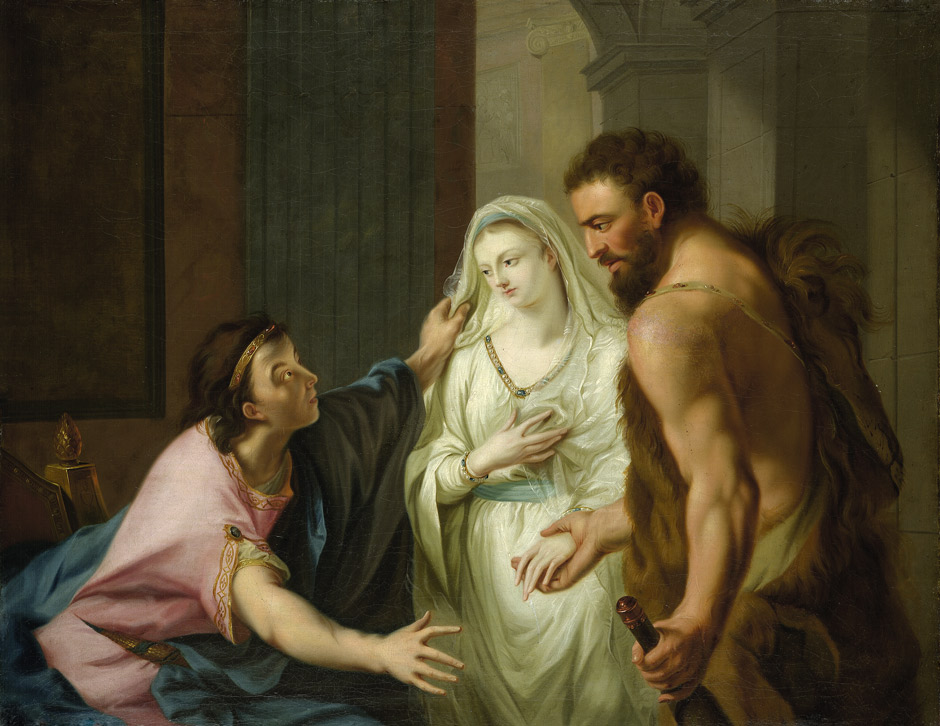 Heracles is mortified at his blunder and his bad behaviour (as well as angry that Admetus could deceive a friend in such an embarrassing and cruel way), and he secretly decides to ambush and confront Death when the funerary sacrifices are made at Alcestis‘ tomb, intending to battle Death and force him to give Alcestis up.

Later, when Heracles returns to the palace, he brings with him a veiled woman whom he gives to Admetus as a new wife. Admetus is understandably reluctant, declaring that he cannot violate his memory of Alcestis by accepting the young woman, but eventually he submits to his friend’s wishes, only to find that it is in fact Alcestis herself, back from the dead. She cannot speak for three days after which she will be purified and fully restored to life. The play ends with the Chorus thanking Heracles for finding a solution that none had foreseen.

Euripides presented “Alcestis” as the final part of a tetralogy of unconnected tragedies (which included the lost plays “The Cretan Woman”, “Alcmaeon in Psophis” and “Telephus”) in the competition of tragedies at the annual City Dionysia competition, an exceptional arrangement in that the fourth play presented at the dramatic festival would normally have been a satyr play (an ancient Greek form of tragicomedy, not dissimilar to the modern-day burlesque style).

Its rather ambiguous, tragicomic tone has earned for the play the label of “problem play”. Euripides certainly expanded the myth of Admetus and Alcestis, adding some comic and folk tale elements to suit his needs, but critics disagree about how to categorize the play. Some have argued that, because of its mingling of tragic and comic elements, it can in fact be considered a kind of satyr play rather than a tragedy (although clearly it is not in the usual mould of a satyr play, which is usually a short, slapstick piece characterized by a Chorus of satyrs – half men, half beasts – acting as a farcical backdrop to the traditional mythological heroes of tragedy). Arguably, Heracles himself is the satyr of the play.

There are also other ways in which the play can be considered problemmatic. Unusually for a Greek tragedy, it is not clear exactly who the main character and tragic protagonist of the play is, Alcestis or Admetus. Also, some of the decisions made by some the characters in the play seem somewhat suspect, at least to modern readers. For example, although hospitality was considered a great virtue among the Greeks (which is why Admetus did not feel he could send Heracles away from his house), to hide his wife’s death from Heracles purely in the interests of hospitality seems excessive. 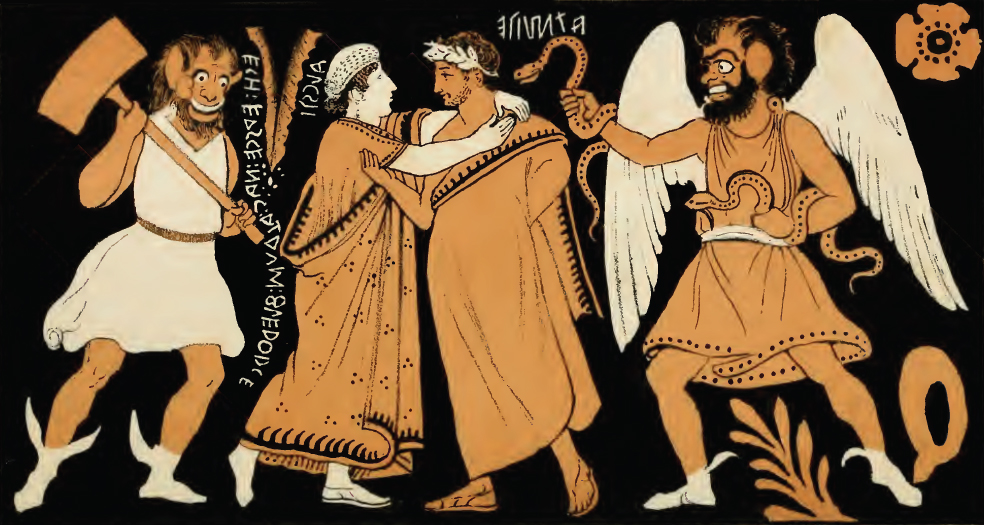 Likewise, although ancient Greece was very much a chauvinistic and male-dominated society, Admetus perhaps overreaches the bounds of the reasonable when he allows his wife to take his place in Hades. Her unselfish sacrifice of her own life in order to spare her husband’s illuminates the Greek moral code of the time (which differed considerably from that of the present day) and the role of women in Greek society. It is unclear whether Euripides, by showing how hospitality and the rules of the male world transcend the whims (and even the dying wish) of a woman, was merely reporting the social mores of his contemporary society, or whether was he calling them into question. “Alcestis” has become a popular text for women’s studies.

Clearly, the unequal relationship of man to woman is a major theme of the play, but several other themes are also explored, such as family vs. hospitality, kinship vs. friendship, sacrifice vs. self-interest and object vs. subject.