“The Trojan Women“ (Gr: “Troädes“) is a tragedy by the ancient Greek playwright Euripides. It was first presented at the City Dionysia of 415 BCE, along with two other unconnected tragedies, “Alexandros“ and “Palamedes“, and the comedic satyr play “Sisyphos“, all of which have since been lost to antiquity.

It follows the fates of Hecuba, Andromache, Cassandra and the other women of Troy after their city has been sacked, their husbands killed, and their remaining families about to be taken away as slaves (it runs parallel to the events in Euripides‘ play “Hecuba“). It is often considered one of Euripides‘ greatest works, and among the best anti-war plays ever written.

The play begins with the god Poseidon lamenting the fall of Troy. He is joined by the goddess Athena, who is incensed by the Greek’s exoneration of Ajax the Lesser’s actions in dragging away the Trojan princess Cassandra from Athena’s temple (and possibly raping her). Together, the two gods discuss ways to punish the Greeks, and conspire to destroy the home-going Greek ships in revenge.

As the dawn comes, the dethroned Trojan queen Hecuba awakens in the Greek camp to mourn her tragic fate and curse Helen as the cause, and the Chorus of captive Trojan women echoes her cries. The Greek herald Talthybius arrives to tell Hecuba what will befall her and her children: Hecuba herself is to be taken away as a slave of the hated Greek general Odysseus, and her daughter Cassandra is to become the conquering general Agamemnon‘s concubine.

Cassandra (who has been driven partially mad due to a curse under which she can see the future but will never be believed when she warns others), appears morbidly pleased with this news as she foresees that, when they arrive in Argos, her new master’s embittered wife Clytemnestra will kill both her and Agamemnon, although because of the curse no-one understands this response, and Cassandra is carried away to her fate. 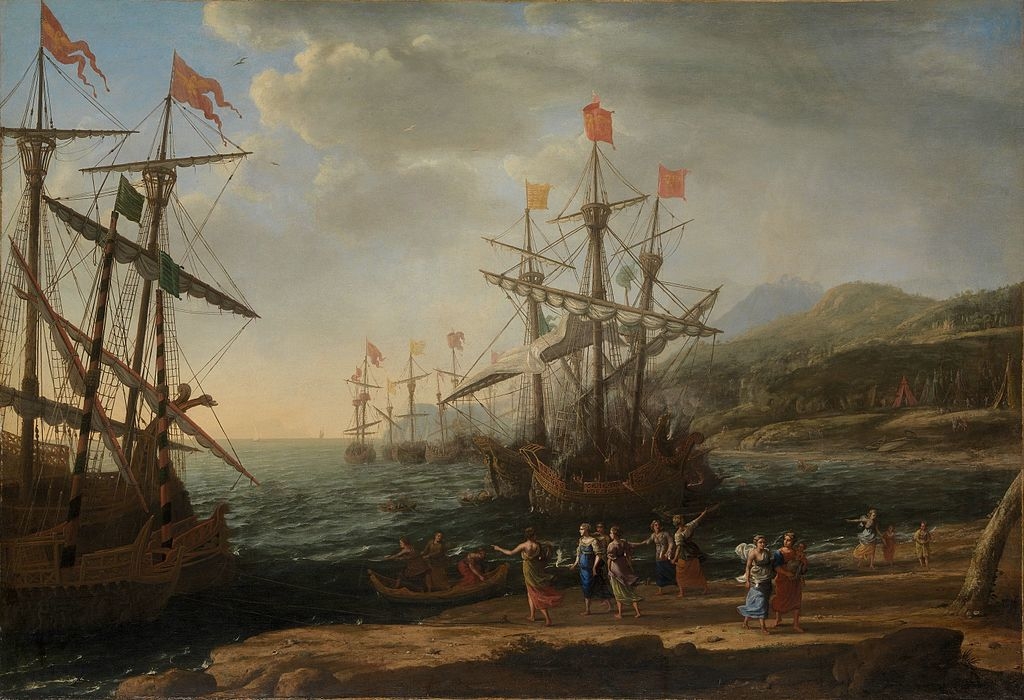 Hecuba‘s daughter-in-law Andromache arrives with her baby son, Astyanax and confirms the news, hinted at earlier by Talthybius, that Hecuba‘s youngest daughter, Polyxena, has been killed as a sacrifice at the tomb of the Greek warrior Achilles (the subject of Euripides‘ play “Hecuba“). Andromache‘s own lot is to become the concubine of Achilles‘ son, Neoptolemus, and Hecuba counsels her to honour her new lord in the hope that she may be permitted to rear Astyanax as a future saviour of Troy.

However, as though to crush these pitiful hopes, Talthybius arrives and reluctantly informs her that Astyanax has been condemned to be thrown from the battlements of Troy to his death, rather than risk the boy growing up to avenge his father, Hector. He warns further that if Andromache tries to cast a curse on the Greek ships, then the baby will be allowed no burial. Andromache, cursing Helen for causing the war in the first place, is taken away to the Greek ships, while a soldier bears the child away to his death.

The Spartan king Menelaus enters and protests to the women that he came to Troy to revenge himself on Paris and not to take back Helen, but Helen is nevertheless to return to Greece where a death sentence awaits her. Helen is brought before him, still beautiful and alluring after all that has happened, and she begs Menelaus to spare her life, claiming that she was bewitched by the goddess Cypris and that she did attempt to return to Menelaus after the spell was broken. Hecuba scorns her unlikely story, and warns Menelaus that she will betray him again is she is allowed to live, but he remains implacable, merely ensuring that she travel back on a ship other than his own. 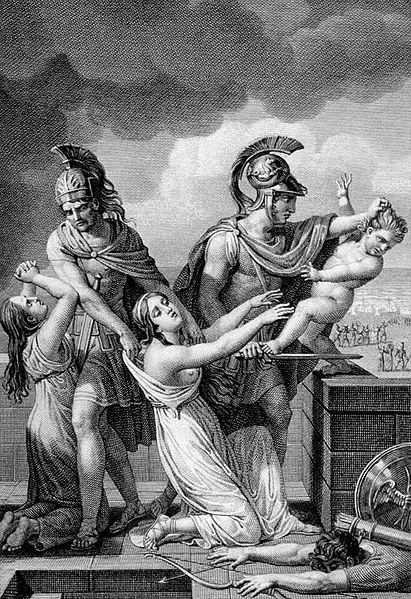 Towards the end of the play, Talthybius returns, bearing with him the body of little Astyanax on Hector‘s great bronze shield. Andromache had wished to bury her child herself, performing the proper rituals according to Trojan ways, but her ship has already departed, and it falls to Hecuba to prepare the body of her grandson for burial.

As the play closes and flames rise from the ruins of Troy, Hecuba makes a last desperate attempt to kill herself in the fire, but is restrained by the soldiers. She and the remaining Trojan women are taken off to the ships of their Greek conquerors.

“The Trojan Women” has long been considered an innovative and artistic portrayal of the aftermath of the Trojan War, as well as a penetrating depiction of the barbaric behaviour of Euripides‘ own countrymen towards the women and children of the people they subjugated in war. Although in technical terms it is perhaps not a great play – it has little developing plot, little construction or action and little relief or variety in tone – its message is timeless and universal.

Premiering in the spring of 415 BCE, as Athens’ military fate was held in the balance sixteen years into the Peloponnesian War against Sparta, and not long after the Athenian army’s massacre of the men of the island of Melos and their enslavement of their women and children, Euripides‘ tragic commentary on the inhumanity of war challenged the very nature of Greek cultural supremacy. In contrast, the women of Troy, notably Hecuba, appear to shoulder their burdens with nobility and decency.

Led by the circumstances they find themselves in, the Trojan women, Hecuba in particular, repeatedly question their faith in the traditional pantheon of gods and their dependence on them, and the futility of expecting wisdom and justice from the gods is expressed again and again. The gods are portrayed in the play as jealous, head-strong and capricious, which would have greatly disturbed the more politically conservative contemporaries of Euripides, and it is perhaps no surprise that the play did not win in the Dionysia dramatic competition, despite its obvious quality. 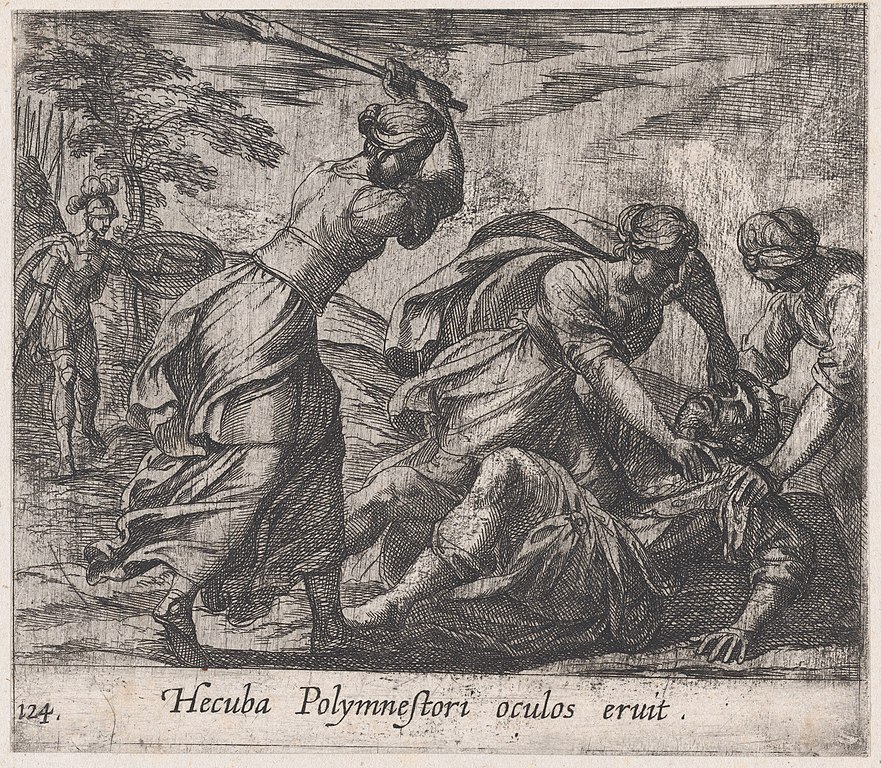 The main Trojan women around whom the play revolves are deliberately portrayed as very unlike each other: the weary, tragic old queen, Hecuba; the young, holy virgin and seer, Cassandra; the proud and noble Andromache; and the beautiful, scheming Helen (not a Trojan by birth, but her view of the events is also presented by Euripides for contrast). Each of the women is granted a dramatic and spectacular entrance into the play, and each reacts to the tragic circumstances in her own individual way.

The other (less grand but equally pitiful) women of the Chorus also have their say and, in calling attention to the grief of the ordinary women of Troy, Euripides reminds us that the grand ladies of the court are now just as much slaves are they are, and that their sorrows are actually very similar in nature.

Of the two male characters in the play, Menelaus is portrayed as weak and officious, while the Greek herald Talthybius is represented as a sensitive and decent man caught up in a world of depravity and grief, a much more complex character than the usual anonymous herald of Greek tragedy, and the only Greek in the whole play who is presented with any positive attributes at all.