“Hippolytus” (Gr: “Hippolytos”) is a tragedy by the ancient Greek playwright Euripides, first produced at the Athens City Dionysia in 428 BCE, where it won first prize (as part of a trilogy). It is based on the myth of Hippolytus, son of Theseus, and how a series of misunderstandings and the meddling of the gods result in his death and that of his step-mother, Phaedra. 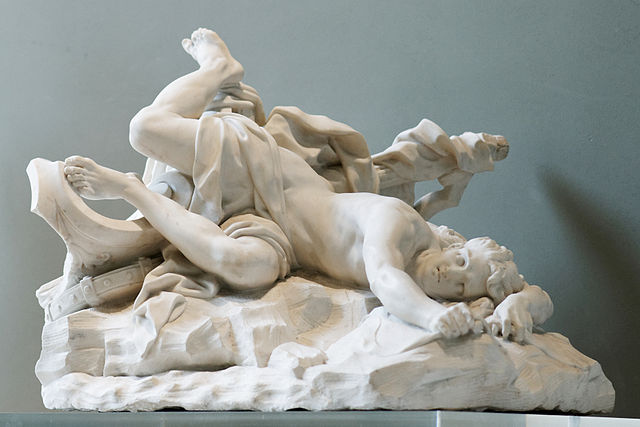 The play is set in Troezen, a coastal town in the northeastern Peloponnese, where King Theseus of Athens is serving a year’s voluntary exile after having murdered a local king and his sons. Hippolytus, Theseus‘ illegitimate son with the Amazon Hippolyta, has lived and trained in Troezen since his early childhood, under the protection of Pittheus, the king of Troezen.

At the start of the play, Aphrodite, the goddess of love, explains that Hippolytus has sworn a vow of chastity and now refuses to revere her, instead honouring Artemis, the chaste goddess of the hunt. Hippolytus is warned about his overt disdain for Aphrodite, but he refuses to listen. As an act of vengeance for Hippolytus‘ snub, Aphrodite has caused Phaedra, Theseus‘ wife and Hippolytus‘ stepmother, to fall madly in love with him.

The Chorus of young married women of Troezen describe how Phaedra is not eating or sleeping, and Phaedra finally shocks the Chorus and her nurse by reluctantly admitting that she is sick with love for Hippolytus, and that she plans to starve herself in order to die with her honour intact. 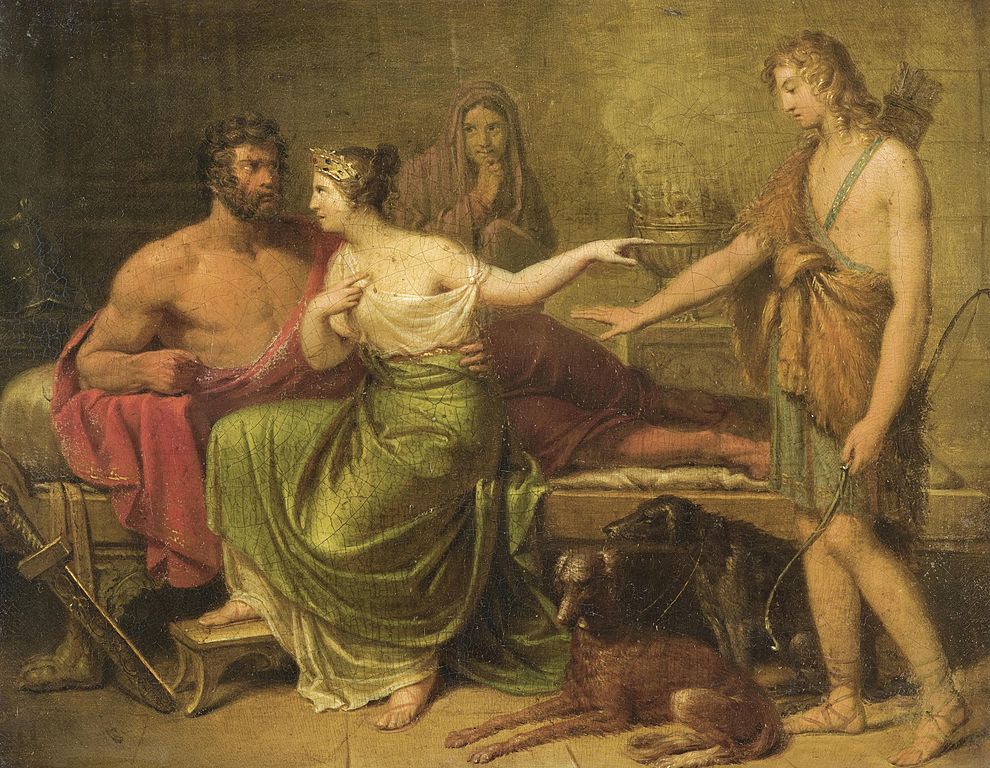 The nurse soon recovers from her shock, though, and urges Phaedra to give in to her love and live, telling Phaedra that she knows of a medicine which will cure her. Instead, however, the nurse runs to tell Hippolytus of Phaedra‘s desire (against Phaedra‘s express wishes, even if done out of love for her), making him swear an oath that he will not tell anyone else. He reacts with a furious, misogynistic tirade on the poisonous nature of women

Since the secret is out, Phaedra believes she is ruined and, after making the Chorus swear secrecy, she goes inside and hangs herself. Theseus then returns and discovers his wife’s dead body, along with a letter which seems to clearly place the blame for her death on Hippolytus. Misinterpreting this to mean that Hippolytus had raped Phaedra, the enraged Theseus curses his son to death or at least exile, calling on his father Poseidon to enforce the curse. Hippolytus protests his innocence, but cannot tell the whole truth because of the binding oath he previously swore to the nurse. As the Chorus sings a lament, Hippolytus goes off into exile.

However, a messenger appears shortly to report how, as Hippolytus got into his chariot to leave the kingdom, a sea-monster sent by Poseidon (at Aphrodites’ request) frightened his horses and dragged Hippolytus along the rocks. Hippolytus lies dying, but Theseus still refuses to believe the messenger’s protests that Hippolytus was innocent, revelling in Hippolytus‘ suffering.

Artemis then appears and tells him the truth, explaining that his son was innocent and that it was the dead Phaedra who had lied, although she also explains that the ultimate blame must lie with Aphrodite. As Hippolytus is carried in, barely alive, Artemis vows revenge on Aphrodite, promising to kill any man that Aphrodite holds dearest in the world. With his final breaths, Hippolytus absolves his father of his death, and finally dies.

It is believed that Euripides first treated the myth in a play called “Hippolytos Kalyptomenos” (“Hippolytus Veiled”), now lost, in which he portrayed a shamelessly lustful Phaedra who directly propositioned Hippolytus on stage, much to the displeasure of the Athenian audience. He then revisited the myth in “Hippolytos Stephanophoros” (“Hippolytus Crowned”), also lost, this time with a much more modest Phaedra who fights her sexual appetites. The surviving play, entitled simply “Hippolytus”, offers a much more even-handed and psychologically complex treatment of the characters than either of these earlier lost plays, and a more sophisticated treatment than is commonly found in traditional retelling of myths.

This even-handededness is demonstrated in the way that neither of the two main characters, Phaedra and Hippolytus, are presented in a wholly favourable light. Euripides has often been accused of misogyny in his presentation of characters such as Medea and Electra, but Phaedra here is initially presented as a generally sympathetic character, honourably struggling against overwhelming odds to do the right thing. Our regard for her is reduced, however, by her indictment of Hippolytus. On the other hand, the character of Hippolytus is unsympathetically portrayed as puritannical and misogynistic, although he is partially redeemed by his refusal to break his oath to the nurse and by his forgiveness of his father.

The gods Aphrodite and Artemis appear at the begining and end of the play respectively, framing the action, and representing the conflicting emotions of passion and chastity. Euripides pins the blame for the tragedy squarely on Hippolytus‘ hubris in rejecting Aphrodite (rather than on his lack of sympathy for Phaedra or his misogynism), suggesting that the true malevolent force in the play is uncontrollable desire as personified by the vindictive Aphrodite. The disaffected goddess of chastity, Artemis, however, does not try to protect her favourite, as the gods so often do, but rather abandons him at his very moment of death.

Among the themes of the play are: personal desire vs. the standards of society; uncontrolled emotion vs. excessive control; unrequited love; the sacrosanct nature of oaths; hastiness in judgement; and the distasteful character of the gods (as they to give in to pride, vanity, jealousy and anger).