“Medea” (Gr: “Medeia”) is a tragedy written by the ancient Greek playwright Euripides, based on the myth of Jason and Medea, and particularly Medea‘s revenge against Jason for betraying her with another woman. Often considered Euripides‘ best and most popular work and one of the great plays of the Western canon, it only won third prize when it was presented at the Dionysia festival in 431 BCE, along with the lost plays “Philoctetes”, “Dictys” and “Theristai”.

After the adventures of the Golden Fleece, the Greek hero Jason took his wife Medea into exile at Corinth. However, he then left her, seeking to advance his political ambitions by marrying Glauce, the daughter of King Creon of Corinth.

The play opens with Medea grieving over the loss of her husband’s love. Her elderly nurse and the Chorus of Corinthian women (generally sympathetic to her plight) fear what she might do to herself or her children. King Creon, also fearing what Medea might do, banishes her, declaring that she and her children must leave Corinth immediately. Medea begs for mercy, and is granted a reprieve of one day, all she needs to extract her revenge.

Jason arrives and attempts to explain himself. He says that he does not love Glauce but can not pass up the opportunity to marry a wealthy and royal princess (Medea is from Colchis in the Caucusus and is considered a barbarian witch by the Greeks), and claims that he hopes one day to join the two families and keep Medea as his mistress. Medea and the Chorus of Corinthian women do not believe him. She reminds him that she left her own people for him, murdering her own brother for his sake, so that she can never now return home. She also reminds him that it was she herself who saved him and slew the dragon which guarded the Golden Fleece, but he is unmoved, merely offering to placate her with gifts. Medea hints darkly that he may live to regret his decision, and secretly plans to kill both Glauce and Creon.

Medea is then visited by Aegeus, the childless king of Athens, who asks the renowned sorceresss to help his wife conceive a child. In return, Medea asks for his protection and, although Aegeus is not aware of Medea‘s plans for revenge, he promises to give her refuge if she can escape to Athens. 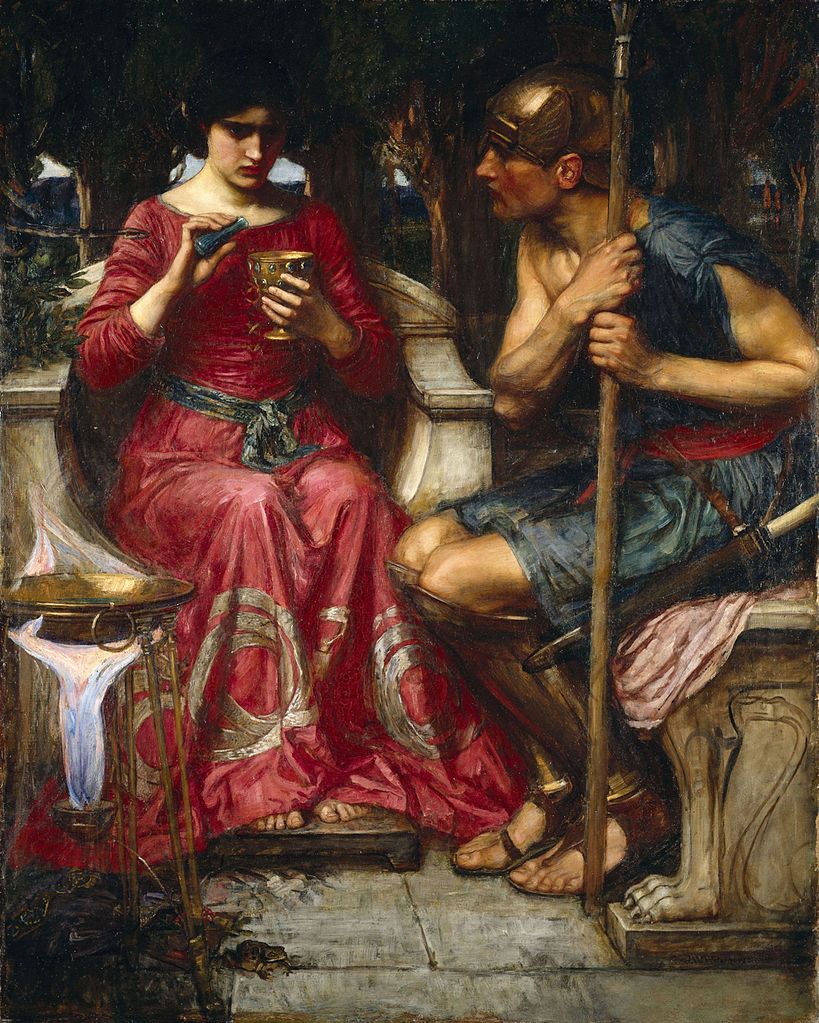 Medea tells the Chorus of her plans to poison a golden robe (a family heirloom and gift from the sun god, Helios) which she believes the vain Glauce will not be able to resist wearing. She resolves to kill her own children as well, not because the children have done anything wrong, but as the best way her tortured mind can think of to hurt Jason. She calls for Jason once more, pretends to apologize to him and sends the poisoned robe and crown as a gift to Glauce, with her children as the gift-bearers.

As Medea ponders her actions, a messenger arrives to relate the wild success of her plan. Glauce has been killed by the poisoned robe, and Creon has also been killed by the poison while attempting to save her, both daughter and father dying in excruciating pain. She wrestles with herself over whether she can bring herself to kill her own children too, speaking lovingly to them all the while in a moving and chilling scene. After a moment of hesitation, she eventually justifies it as a way of saving them from the retribution of Jason and Creon‘s family. As the Chorus of women laments her decision, the children are heard screaming. The Chorus considers interfering, but in the end does nothing.

Jason discovers the murder of Glauce and Creon and rushes to the scene to punish Medea, only to learn that his children too have been killed. Medea appears in the chariot of Artemis, with the corpses of her children, mocking and gloating over Jason‘s pain. She prophesies a bad end for Jason too before escaping towards Athens with her children’s bodies. The play ends with the Chorus lamenting that such tragic and unexpected evils should result from the will of the gods.

Although the play is now considered one of the great plays of ancient Greece, the Athenian audience did not react so favourably at the time, and awarded it only third place prize (out of three) at the Dionysia festival of 431 BCE, adding another disappointment to Euripides‘ career. This may have been due to the extensive changes Euripides made to the conventions of Greek theatre in the play, by including an indecisive chorus, by implicitly criticizing Athenian society and by showing disrespect for the gods. 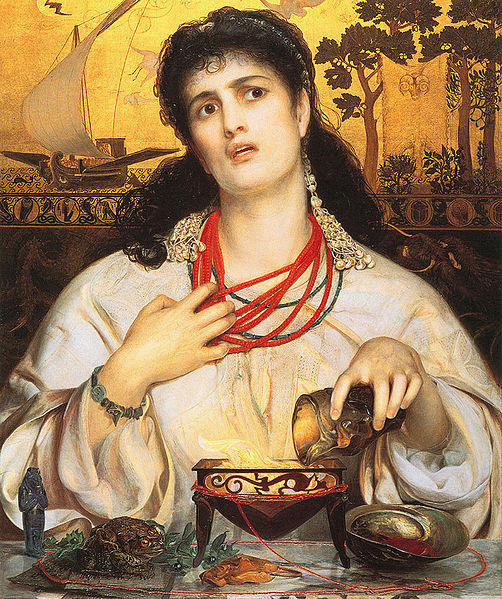 The text was lost and then rediscoved in 1st Century CE Rome, and was later adapted by the Roman tragedians Ennius, Lucius Accius, Ovid, Seneca the Younger and Hosidius Geta among others. It was rediscovered again in 16th Century Europe, and has received many adaptations in the 20th Century theatre, notably Jean Anouilh’s 1946 drama, “MÃ©dÃ©e”.

As in the case of most Greek tragedies, the play does not require any change of scene and takes place throughout outside the facade of Jason‘s and Medea‘s palace in Corinth. Events which occur off-stage (such as the deaths of Glauce and Creon and Medea‘s murder of her children) are described in elaborate speeches delivered by a messenger, rather than enacted before the audience.

Although there are virtually no stage directions in the texts of Greek tragedies, Medea‘s appearance in a chariot drawn by dragons towards the end of the play (in the manner of a “deus ex machina”) would probably have been achieved by a construction on the roof of the skene or suspended from a “mechane”, a kind of crane used in ancient Greek theatres for flying scenes, etc.

The play explores many universal themes: passion and rage (Medea is a woman of extreme behaviour and emotion, and Jason‘s betrayal of her has transformed her passion into rage and intemperate destruction); revenge (Medea is willing to sacrifice everything to make her revenge perfect); greatness and pride (the Greeks were fascinated by the thin line between greatness and hubris, or pride, and the idea that the same traits that make a man or woman great can lead to their destruction); the Other (Medea‘s exotic foreignness is emphasized, made still worse by her status as an exile, although Euripides shows during the play that the Other is not exclusively something external to Greece); intelligence and manipulation (Jason and Creon both try their hands at manipulation, but Medea is the master of manipulation, playing perfectly on the weaknesses and needs of both her enemies and her friends); and justice in an unjust society (especially where women are concerned).

It has been seen by some as one of the first works of feminism, with Medea as a feminist heroine. Euripides‘ treatment of gender is the most sophisticated one to be found in the works of any ancient Greek writer, and Medea‘s opening speech to the Chorus is perhaps classical Greek literature’s most eloquent statement about the injustices that befall women. 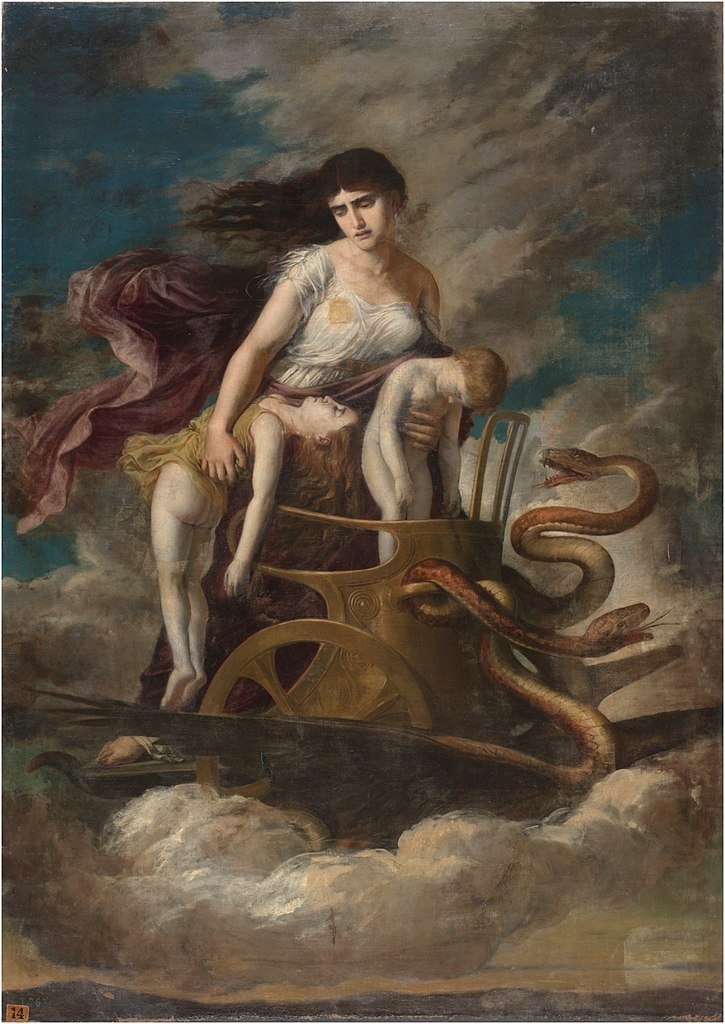 The relationship between the Chorus and Medea is one of the most interesting in all of Greek drama. The women are alternately horrified and enthralled by Medea, living vicariously through her. They both condemn her and pity her for her horrible acts, but they do nothing to interfere. Powerful and fearless, Medea refuses to be wronged by men, and the Chorus cannot help but admire her as, in taking her revenge, she avenges all the crimes committed against all of womankind. We are not, as in Aeschylus‘ “Oresteia”, allowed to comfort ourselves with the restoration of male-dominated order: “Medea” exposes that order as hypocritical and spineless.

In the character of Medea, we see a woman whose suffering, instead of ennobling her, has made her into a monster. She is fiercely proud, cunning and coldly efficient, unwilling to allow her enemies any kind of victory. She sees through the false pieties and hypocritical values of her enemies, and uses their own moral bankruptcy against them. Her revenge is total, but it comes at the cost of everything she holds dear. She murders her own children in part because she cannot bear the thought of seeing them hurt by an enemy.

Jason, on the other hand, is depicted as a condescending, opportunistic and unscrupulous man, full of self-deception and repugnant smugness. The other main male characters, Creon and Aegeus, are also depicted as weak and fearful, with few positive traits to speak of.