Aesop was by tradition a Greek slave, and he is known today exclusively for the genre of fables ascribed to him. “Aesop’s Fables” (most of which have anthropomorphic animals as the main characters) have remained popular throughout history, and are still taught as moral lessons and used as subjects for various entertainments, especially children’s plays and cartoons. 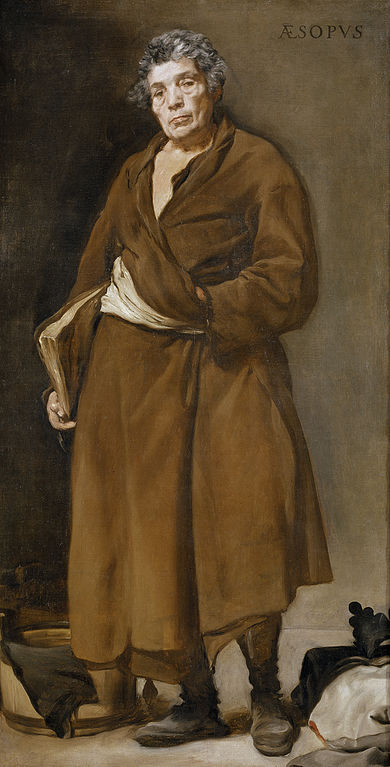 Very little is known about Aesop’s origins. Amorium, Phrygia, Egypt, Ethiopia, Samos, Athens, Sardis, Thrace and many other places have been suggested by different authors as his place of birth. Some claim that his name may be derived from “Aethiopian”, a word often used by the ancient Greeks to refer to any dark-skinned people from the African interior. His date of birth is likewise uncertain, but the best estimate may be around 620 BCE. According to some medieval traditions, he was extremely ugly and deformed, although there is no contemporary evidence to that effect.

Like his birth, the rest of his life is also shrouded in obscurity. He is said to have lived for some time as a slave to a man called Xanthus in Samos. At some stage he must have been freed (possibly by his second master, Jadon, as a reward for his learning and wit) as he is later recorded as conducting the public defense of a demagogue on the Greek island of Samos. Other reports have him subsequently living at the court of Croesus, the king of Lydia, where he met (and apparently impressed with his wit) Solon and the Seven Sages of Greece, and he was also said to have visited Athens during the reign of Peisistratus.

According to the historian Herodotus, Aesop met with a violent death at the hands of the inhabitants of Delphi, although various different reasons for this have been put forward. The best estimate for his date of death is around 560 BCE.

It is probable that Aesop himself never committed his “Fables” to writing, but that the stories were transmitted orally. It is thought that even Aesop’s original fables were probably a compilation of tales from various sources, many of which originated with authors who lived long before Aesop. Certainly, there were prose and verse collections of “Aesop’s Fables” as early as the 4th Century BCE. They were in turn translated into Arabic and Hebrew, further enriched by additional fables from these cultures. The collection with which we are familar today is probably based on a 3rd Century CE Greek version by Babrius, itself a copy of a copy of a copy.

His fables are some of the most well known in the world, and are the source of many phrases and idioms in everyday use (such as “sour grapes”, “crying wolf”, “dog in a manger”, “lion’s share”, etc).

Among the most famous are: