Zeus is the king of the Greek gods and the supreme ruler of Olympus. Zeus is the supreme deity in Ancient Greek religion and is also known as the Father, the god of thunder, or the “cloud-gatherer” because it was thought that he ruled the skies and weather. Being so powerful, could Zeus really fear anyone or anything? 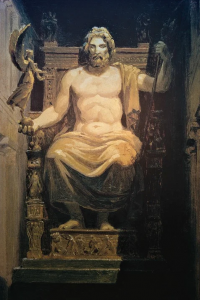 Zeus was not afraid of almost anything. However, Zeus was afraid of Nyx, the goddess of night. Nyx is older and more powerful than Zeus. Not much is known about Nyx. In the most famous myth featuring Nyx, Zeus is too afraid to enter Nyx’s cave for fear of angering her.

What Is Important About Zeus?

Zeus, the son of Cronus, the Titan god of time, and Rhea, the Titan goddess of female fertility, was prophesied to be the most powerful Gods when he was born. When Cronus heard this prophecy, he became fearful that one of his children would overtake him and decided to swallow all of his children.

Zeus survived because Rhea tricked Cronus into eating a rock wrapped in blankets instead of baby Zeus. Zeus and the Olympians eventually succeeded in taking power away from Cronus and the Titans, and upon their victory, Zeus crowned himself the god of the skies.

In his reign as king of the gods, Zeus was deceived and opposed by both gods and men many times in Greek myth. His ability to be tricked shows that he is not all-powerful.

His authority in the pantheon was most notably challenged on one occasion when Hera, Athena and Poseidon bound Zeus to a bed and tried to take over his position as leader of the gods. While Zeus can be tricked and deceived, we seldom see Zeus fearful or afraid of another god.

Who does Zeus fear?

In fact, there is one myth that shows Zeus to be afraid of the goddess Nyx. It is commonly thought that Nyx is the only goddess that Zeus is truly afraid of because she is older and more powerful than him.

This traces back to one story in which Hera, Zeus’ wife and goddess of marriage and childbirth, works together with Hypnos, the god of sleep, to trick Zeus. Hera desired to plot against Zeus, and so she convinced Hypnos to put her husband to sleep. However, Hypnos was not powerful enough to incapacitate Zeus completely.

When Zeus realized what Hypnos did, he chased after him.  Hypnos sought refuge in his mother Nyx’s cave, allowing him to escape Zeus’ wrath. Why didn’t Zeus go after Hypnos into Nyx’s cave? The answer is simple: he was afraid of making Nyx angry.

This story is unique because it shows the usually almighty Zeus being fearful of another goddess’ wrath. It is often thought that Nyx is really the only goddess that Zeus actually fears. 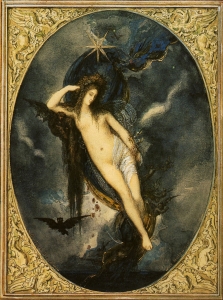 Nyx is a somewhat mysterious figure because she rarely appears in the surviving mythology of the Greek gods. Nyx is the goddess of night and is older than Zeus and the other Olympian gods and goddesses.

That is because Nyx is the daughter of Chaos, the first of the Greek deities to come into existence and the goddess representing the earth’s air. This makes Nyx one of the eleven Protogenoi, meaning “firstborn.”

Chaos gave birth to Nyx and a son named Erebus, the god of darkness. Nyx and Erebus together bore the third generation of Protogenoi, including Aether and Hemara. Hemera, the god of day, and Aether, the goddess of light, are opposites of their parents, night (Nyx) and darkness (Erebus).

In addition to Aether and Hemara, Nyx and Erebus are also thought to be the parents of many other gods not considered to be Protogenoi, including the Oneiroi (gods of dreams), the Keres (goddesses of violent and cruel death), the Hesperides (the goddesses of evening and sunset), the Moirai (the Fates), Geras (the personification of old age), Oizys (goddess of misery), Momus (god of blame), Apate (goddess of deceit), Eris (goddess of strife), Nemesis (goddess of retribution), Philotes (goddess of friendship), Hypnos (the god of sleep), Thanatos (Hypnos’ twin brother and god of death).

Except for Philotes (friendship), most of Nyx’s offspring rule over life’s darker aspects. Nyx resides in Tartarus, the depths of the underworld primarily associated with eternal punishment. Many of the other dark deities, such as Erebus, also reside in Tartarus.

It is said that every night, Nyx and Erebus would leave Tartarus to block out the light from their son Aether (god of the day). In the morning, Nyx and Erebus would return to their home in Tartarus while their daughter Hemara (goddess of light) would come out to wipe away the darkness of night and bring light to the world.

While later Greek myths replaced the roles of Aether and Hemara with gods like Eos (goddess of dawn), Helios (god of the sun) and Apollo (god of light), Nyx’s role was never replaced by another god or goddess. This shows that the Greeks still held Nyx in high regard and regarded her as extremely powerful.

As king of the gods, Zeus is the most powerful among the Olympians. In fact, many were afraid of Zeus as a mighty punisher of those who committed wrongdoings. Among his most famous punishments were that of Prometheus, who was condemned to having his liver eaten by an eagle every day as punishment for giving fire to the human race, and of Sisyphus, who was condemned to roll a stone up a hill in the Underworld for all of eternity as a punishment for his trickery.

While Zeus faced a fair share of enemies, it is commonly thought that the only goddess Zeus was truly afraid of was Nyx. Being the goddess of night, Nyx represents all that is hidden or covered by the darkness. Perhaps Zeus feared that he could not know or see; things lurking under the cover of the darkness of night and protected by Nyx.

Catharsis in Antigone seems to be absent to the untrained eye, but as Aristotle says, “Catharsis is the aesthetic form of a tragedy,” and nothing is more tragic than Antigone’s journey. The various deaths we’ve witnessed in its prequel and the twists and turns have left us all curious about the third installment of the…

Antigone’s civil disobedience can be considered one of the play’s central themes, considering the Greek classic revolves around our main heroine’s defiance of civil laws. How and why would Antigone go against the governing body of her homeland? Why would she do such a thing despite the consequences of death? To answer these, we must…

Jocasta Oedipus is the queen of Thebes and wife of King Laius who received a prophecy that she would give birth to a boy who would kill her husband and marry her. Therefore, she and her husband decided to kill the boy by exposing him on Mount Cithaeron. Many have described her as a cruel…

‘Was the battle of Troy real?’ has been a subject of debate among scholars with many of them agreeing that the battle was mythological due to some characters and events described in the play. They feel that those events were fantastical and the characters in the Greek epic poem displayed superhuman traits. However, was the…

Ascanius in the Aeneid was the son of the epic hero Aeneas and his wife Creusa, the daughter of King Priam. He fled with his father from Troy as the Greeks besieged the once illustrious city and accompanied him on his journey to Italy.  The Aeneas and Ascanius relationship was a strong one that contributed…

The Greek god of rain was Zeus, the king and father of the Olympians and the men. Zeus is the most famous Olympian god from Greek mythology, and rightfully so. All the works of Homer and Hesiod, describe Zeus, his relationships, and his life in one way or another.  Here, in this article, we bring…

This site uses Akismet to reduce spam. Learn how your comment data is processed.